Zuckerberg: “We should be teleporting, not transporting”

Facebook CEO Mark Zuckerberg appeared on the new Clubhouse app where he discussed the latest Facebook tech. He shared that combining VR and AR technology would bring Google Glass and even teleporting to succeed in the future.

Facebook CEO Mark Zuckerberg has pointed at the scientific future where people can teleport, instead of commuting physically from one place to the other. Appearing on the invite-only Clubhouse app, he shared Facebook’s progress in virtual reality (VR) and augmented reality (AR) technology. 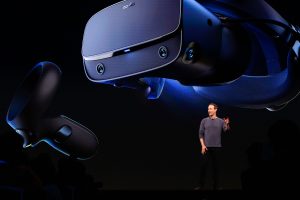 Clubhouse is a new audio-only social media platform which claims to be “the world’s buzziest new social network.” In fact, Zuckerberg’s participation in ‘The Good Time Show,’ a talk show in the app was a surprise for everyone. There he spoke about VR and AR technology, giving insights into the research being undertaken at Facebook’s Reality Labs under the name ‘Zuck23’.

Is Mark Zuckerberg just doing diligence on Clubhouse so he can spin up an “audio rooms” initiative on FB/WhatsApp/Messenger? 🤔

Mark Zuckerberg couldn’t even get a reasonable username on clubhouse pic.twitter.com/WGKcfNJfLR

“It is going to unlock a lot of economic opportunities because people will be able to live where they want and increasingly work where they want and kind of teleport into place. I am also pretty optimistic about the impact on climate, in reducing the amount of commuting that people have to do. I think the advance in electric cars in reducing emissions is great and exciting, but I tell my team that it is easier to move bits of atoms around so we should be teleporting, not driving.  Right now we are getting all the graphics and visual systems to really feel like you are immersed in the space.”

Zuckerberg’s suggestion was to combine both VR and AR technologies to achieve teleportation. While VR makes use of the entire display and immerses users in a different world, AR allows users to place things into the physical world around them, giving a reality picture around.

Giving the example of how AR would help solve the problem that led to the failure of Google Glass, he noted that  the technology will have to be made socially acceptable and miniaturized into thick-rimmed glasses.

We are all aware that there’s a long path that needs to get done to kind of get to the point that we want. In the light of the lockdowns, remote working style has proved that the physical offices are not mandatory. The plan is that with the help of VR technology Facebook will allow 50% of its staff to work remotely by the end of this decade.

Previous Post How Can Programmers Cope Up With Computer Vision Syndrome?
Next Post Check Out the Most Used Programming Languages in 2020