Nikita Ovsiannikov is an Advanced App Engineering Specialist at Accenture Technology. He is hands-on, professionalist, and perfectionist. Nikita is always working to give his best results and he doesn’t allow anyone’s questions to be unanswered.

What is the reason to nominate him?

Nikita has always gone that extra step, making sure that no matter the task, he gives maximum effort. Regardless of whether it is a client calling with last minute changes on a cloudy Friday evening or a colleague who does not understand a particular technology or solution, Nikita will stay up and make sure they both get the necessary attention. It is exactly this kind of dedication that has yielded in several of his hours-long lectures, describing each and every aspect of git/ECS/VPCs to new joiners while still guaranteeing the quality in his deliverables. His passion for teaching and making sure no one ever leaves with a question unanswered is probably the reason he was chosen to facilitate last year’s Junior Java Academy. These are just some of the reasons why I think Nikita deserves to be a Developer on Focus. 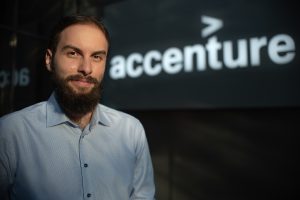 Please, tell us more about his professional characteristics.

Can you describe how his working day goes?

Large portions of his day are spent jumping between meetings, motivating his colleagues, and mentoring the next generation of developers. His passion for teaching can be heard from a mile away (sometimes he could get loud) making sure no question is left unanswered. Any moment not spent in a meeting he takes care of the code, mostly doing code clean ups and reviewing PRs.

What are his challenges? What is he currently working on?

Working on multiple projects and handling several internal initiatives, multitasking is definitely the toughest challenge that Nikita has to overcome. He is currently working as the Tech Lead and Architect for Culturama – a CSR initiative to create a non-profit digital platform in support of the Bulgarian artistic talents. His role includes mentoring the developers, tracking progress and guarantee the world class quality that Accenture is renowned for. On the other hand, he is a senior developer and performance standard validator for a large-scale sustainability project. Jumping from a project to an interview, followed by some internal initiative then back to the project is what Nikita has to overcome, on a daily basis, learning to entrust his colleagues and the team.

Describe him in 3 words.

Does he take part in the company’s voluntary programs? What are they? Does he have individual campaigns?

Nikita actively spends time taking care of recruitment and teaching responsibilities within the Java department. He started with simple technical interviews, revitalizing the online tests and coding challenges, and maintaining candidate tracking, eventually becoming the Java department recruitment lead. Even so he still had the time, energy, and dedication to facilitate the organization, project planning and candidate selection for the 2021 edition of the Accenture Junior Java Academy, all while completing his daily development tasks.

What are his hobbies?

Nikita is an avid tennis player, playing the sport ever since he was 6 years old with his best friend at the time. To this day he continues to passionately play the sport, albeit mostly as a stress reliever. His other passion lies with Artificial Intelligence and data, currently studying how to leverage NEAT learning algorithm. 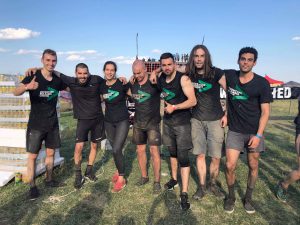 What kind of music does he listen to?

Yes! Gaming is most likely even the reason why he is part of the software industry in the first place. Starting from a rather young age of 7, Nikita has spent the majority of his childhood glued to the CRT monitors. Since his family did not have a computer at that time, he would spend most of his time with his close friend, gaming and eventually learning programming (the friend’s father was an engineer). This passion for games and programming has been carried on through high school, where he even learned OpenGL to make several 2D phone games.