Check Out the Most Used Programming Languages in 2020

In the light of early 2020, JavaScript and HTML/CSS were the most widely used programming languages among software developers worldwide, according to Statista. 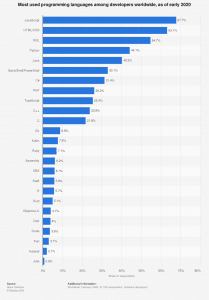 rly 68% of respondents stated that they used JavaScript and 63.5% used HTML/CSS. SQL is reported to be used by 54.7%. The top five most used programming languages around the world were also rounded out by Python and Java.

Speaking at a very basic level, programming languages serve as a set of instructions which direct devices how to perform and carry out tasks. These languages play a very crucial role in the everyday lives of developers around the world thanks to the increased prevalence of, and reliance on, computers and electronic devices in today’s society.

With the time an increasing number of people are interested in furthering their understanding of these tools through courses while current developers are constantly seeking new languages and resources to learn to add to their skills.

What is more, nowadays programming knowledge is one of the most important skills to possess within various industries throughout the business world. Job seekers with skills in Python, R and SQL will find their knowledge to be among the most highly desirable data science skills and likely assist in their search for employment.

Previous Post Zuckerberg: “We should be teleporting, not transporting”
Next Post A new digital age for every employee with Microsoft Viva