IBM is trying to find and train more COBOL programmers

COBOL programmers are in growing demand in some states in the fight against the coronavirus. The reason is that a number of states continue to run the decades-old programming language on mainframe systems. These systems include critical unemployment claims systems in the first place. 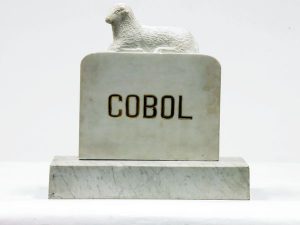 was designed in 1959 according to Computer History Museum. The committee that developed the COBOL programming language endured criticism, with many skeptics predicting that the language would be a failure. Committee member Howard Bromberg had made a tombstone for COBOL as a practical joke, but COBOL turned out to be a great success and still runs critical systems.

According to Reuters, more than half of the states in the US, including California, New York and Pennsylvania, still rely on decades-old mainframe systems based on COBOL.

A report from Reuters in 2017 shared the following jaw-dropping statistics about the important systems based on COBOL like banking software for ATMs and credit card transactions, traffic lights and critical public-facing infrastructures.

These statistics from Reuters report shows that:

The problem is so real and critical that New Jersey Gov. Phil Murphy has issued a call for volunteers who have coding skills in the 60-year-old COBOL (COmmon Business Oriented Language) programming language because many of the state’s systems still run on older mainframes, according to New York Magazine.

“Literally, we have systems that are 40-plus-years-old,” Murphy said in his speech. “There’ll be lots of postmortems, and one of them on our list will be “how did we get here, where we literally needed COBOL programmers?”

In fact COBOL is like every other programming language – it has its specific features but is not more special and difficult than the other modern languages. But the problem is that coders have moved away from the aging language and the general population of COBOL programmers is generally much older than the average age of a typical software developer.

Looking for a solution IBM has addressed a call for skilled COBOL coders by working in tandem with the Linux Foundation’s Open Mainframe Project to create three new initiatives to address the immediate need: