Can you trick Tesla’s Autopilot into operating without driver?

The Autopilot feature in Tesla vehicles can be tricked into operating without a driver, according to a consumer report.

Consumer Reports examined that Autopilot can operate without a driver. They tested the Model Y on a closed track and concluded the system could be “easily tricked”. This comes days after a fatal Tesla crash in Texas however, police believe that there was no driver.

Tesla’s Autopilot is an advanced driver assistance system that “enhances safety and convenience behind the wheel”. Tesla’s website says that their Autopilot system requires a “fully attentive driver” and using the system does not make the car autonomous.

The Consumer Reports team noted that they managed to successfully and repeatedly trick the car into driving their test track with no driver. Jake Fisher, Consumer Reports auto testing director commented: 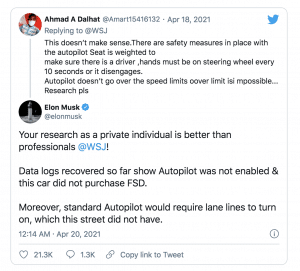 “In our evaluation, the system not only failed to make sure the driver was paying attention, but it also couldn’t tell if there was a driver there at all. It was a bit frightening when we realized how easy it was to defeat the safeguards, which we proved were clearly insufficient.”

Some of the safety requirements for Autopilot mode include: keeping the driver’s hands on the steering wheel, buckling the seatbelt and not opening any doors.

On Saturday, two men were killed after a Tesla car crashed into a tree and caught fire in Texas. The victims were found in the front passenger seat and in the back seat of the vehicle, which means that there was no driver. Elon Musk said:

“… data logs recovered so far show Autopilot was not enabled. Moreover, standard Autopilot would require lane lines to turn on, which this street did not have”.