This is the Magnetic Pixel Robot that can take Different Shapes

Magnetic soft robots are systems that can change shape or perform different actions when a magnetic field is applied to them. Such robots have numerous advantageous characteristics such as a wireless drive, high flexibility and infinite endurance.

In fact, micro-scale magnetic soft robots could be implemented in a variety of settings. For example helping humans to monitor the environment or to remotely perform biomedical procedures. 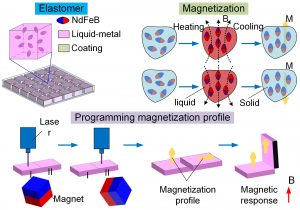 Researchers at the Chinese Academy of Sciences have recently created a new technique for creating shape-programmable magnetic soft robots. This technique, outlined in a paper pre-published on arXiv and presented at the CCIR2021 conference, allowed them to create a new robot based on magnetic pixels that can change shapes and complete a variety of actions or tasks.Ran Zhao, one of the researchers, commented in an interview with TechExplore:

“Whether they are based on soft or hard magnetic materials, the magnetization process of most soft robots is coupled with its manufacturing process. In other words, the robots cannot realize the reconfiguration of functions through programs like traditional robots with control units. This means that magnetic soft robots have a long way to go before they can be applied in real-world settings.”

The new approach introduced by Zhao and his colleagues enables the creation of magnetic soft robots that can be programmed repeatedly. The key method behind this approach is to wrap the magnetic particles used to fabricate the robots in phase transition materials. Zhao also explained:

The robot is made up of magnetic pixels, particles containing a liquid metal and a neodymium magnet , as well as an elastic matrix made of silicon. The robot can maintain a fixed shape, simply by switching to its ‘rigid body’ mode.

“The technique we created allows our magnetic soft robot to reconfigure its functions and switch freely between soft form and rigid form, so as to meet the needs of different tasks. The magnetic soft robot has a certain intelligence, thus the range of tasks it can execute has been greatly increased.”

In the future, the magnetic coding technique could be used to create soft magnetic robots. Zhao and his colleagues have already demonstrated its potential by using it to create several magnetic soft robots based on an origami structure.

Their work highlights the feasibility of manufacturing magnetic, reusable and soft robots on a large scale. These robots could be particularly useful for environmental monitoring, drug transport and in vivo sampling applications.