The UAE has selected two new Emiratis to be part of its astronaut corps, including the Arab world’s first female astronaut.

“We announce today … two new Emirati astronauts … among them, the first Arab woman astronaut Nora Al Matrooshi and Mohammed Al Mulla. They have been chosen from among more than 4,000 applicants and their training will soon begin with the Nasa astronaut programme. We congratulate the country. We count on them to raise the name of the UAE in the sky.”

Progress is being made by different space agencies to create gender equality in the space sector, which has been male-dominated since the early days of space exploration in the 1960s. As of 2020, of more than 550 astronauts who had gone to space, only 65 were women. The selection of the two new astronauts echoes the UAE’s focus on equal opportunities for women.

The 4,305 applicants were chosen based on age and educational background. A total of 2,099 candidates then passed the IQ, personality and technical assessments. Of these, 61 candidates took part in preliminary and advanced medical examinations. Fourteen passed a final round of interviews and evaluations, which the UAE’s first two astronauts and two female Nasa astronauts participated in. 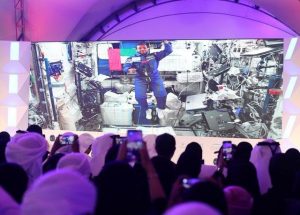 Salem Al Marri, head of the astronaut programme at the Mohammed bin Rashid Space Centre (Mbrsc), said the space centre’s goal was to pick the best out of the lot.

“The team at Mbrsc has worked tirelessly after receiving applications to evaluate them according to specific criteria and standards, and then conducted successive evaluations to ensure the selection of the best candidates, until we reached this point to announce the new astronauts.”

Yousuf Al Shaibani, general director of Mbrsc, said the selection of the two new astronauts would help the nation continue to write a new scientific history for the Arab region in the field of space exploration. He noted:

“With the first batch of the UAE Astronaut Programme, we were able to catch the world’s attention, by raising the UAE flag on the International Space Station. We still remember the pride that swept the country when the first Emirati astronaut took off to space. Today, we are moving towards achieving another momentous occasion by announcing the second batch and will continue on our plans to enhance the capabilities of Emirati youth in the space sector.”

Here is some background information of all-female firsts in the space sector: