To celebrate Black History Month, Apple caught up with Kaya Thomas, who shared how she found a new way of expressing herself between the combination of maths and science, and reading and writing via coding.

Coding is a mesh between the logical and the creative because the act of writing code can also be like writing poetry or something else. You’re also actually building something when you code, so it’s a really creative process.”

She is an iOs developer for the meditation app “Calm” and an app developer in the App store, who in 2014 launched “We Read Too” to fill a gap in the literature.

“By the time I got to high school, I started to get really frustrated wondering why there weren’t any books that I was being exposed to that had Black characters or were by Black authors. I started doing my own research and realised that those books existed, but they just weren’t on bestseller lists, or displayed in the library or at the bookstore.” 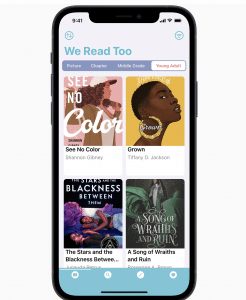 Kaya didn’t discover coding until college, and it was her memory from high school that inspired her to start thinking about a directory of book titles from authors of colour. But can technology solve the diversity problem in literature?

“Technology can sometimes seem like such a black box, this magical thing. But once the veil was ripped away, I realised I could build something that could potentially solve problems. What technology can do, and the beauty of it, provides ease of access and awareness to this issue. Launching We Read Too has allowed me to combine my love for reading, coding, and writing into this app to engage with the literature community in an intimate way, and make these stories more accessible to many more young people around the world.”

Thomas also uncovered some of the trends in Black literature she’s identified over the last year such as  Octavia E. Butler, N.K. Jemisin, and Nnedi Okorafor. In her opinion, it’s essential that speculative fiction books do not create worlds where Black people no longer exist. With more authors and books in this genre, young readers in colour can imagine and envision themselves in a whole new way. She also shares that one of the big trends she has seen in the literature for young people in the Black community is an “increasing acceptance of the multifaceted nature of being Black and the overarching Black experience, like acknowledging mental illness and mental health problems, and the LGBTQIA community”.

Kaya’s main message is that there’s not just one way to be Black. She thinks that if there are more diverse stories, more young people in the Black community will know that there is a space for them.