“The technology is effectively Microsoft’s vision for the future of Office, breaking down the rigid barriers between different types of file format, allowing content to be deconstructed into modular components that can easily be shared between applications, making it easier to create content collaboratively.”

Announced two years ago, the Fluid Framework aims to remove barriers between Microsoft 365 applications, allowing app components such as tables, charts, and lists to be embedded into different apps and updated in real-time by multiple users. For example, changes made to an inventory list table or updates to meeting notes in OneNote will instantly be viewable if the component is also embedded in Outlook or Teams.

These Fluid elements, called “Loop components”, are one of the three key elements in the new app. These Loop component building blocks can be embedded into a Loop “page” that serves as a shared canvas, containing a variety of information sources that relate to a certain team project. 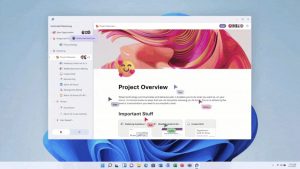 Loop components will be available in Microsoft Teams, Outlook, and OneNote later this month. The company promised more details about the  availability of the standalone Loop app “in the coming months.” According to Raúl Castañón, senior analyst at 451 Research, a division of S&P Global Market Intelligence:

“The launch of Loop is a bold move by Microsoft. Word processors are long overdue for a new approach.”

He sees the Loop app as complementary to, rather than a replacement for, traditional document-editing applications. 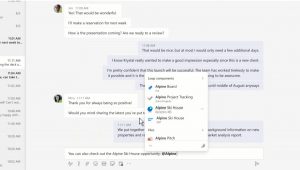 Loops are made of up various Loop “components.” Photo Credits: Microsoft

Dynamics 365 Loop component on its way

In related news, the new Loop component that connects Dynamics 365 records to apps in the company’s Office 365 suite has been mentioned.

Connecting its business apps with productivity tools, such as the ability to embed Teams chat into the Dynamics 365 Sales app has been a central focus for Microsoft.

The new Loop component has been also announced at Ignite Microsoft this week. It builds on the idea, enabling users to pull up a customer record directly in Teams and edit information such as changing a sales opportunity status to “in progress,” while highlighting which user is making changes. The Loop component is going to be available in public preview by the end of 2022.