The season turned out to be an emotional rollercoaster ride, and the final weekend in Berlin has been no exception. After a setback in the title fight in the first race on Saturday, the reward for all the team’s hard work came to fruition on Sunday as Mercedes-EQ rounded off only its second season in the all-electric racing series by clinching both the drivers’ and teams’ World Championships. Nyck de Vries, youngest champion in the history of Formula E, commented:

“I’m lost for words. I mean, it’s been such a tough season with highs and lows, and in the end, it came down to the last race. I am just so pleased that it was enough for me to win the title. We drove an incredible race, we had a very good pace, and I’m very happy for the team that we not only won the drivers’ world championship but also the team title. The team has worked insanely hard this season, and this is the reward we deserve.”

In addition to the World Championship, this weekend Modis and the Mercedes-EQ Formula E Team announced the winner of their global campaign `Lead the Charge: One season, your career in pole position’ with over 2,000 applications from passionate tech and engineering talents, ranging from 66 countries. The Mercedes-EQ Formula E Team and Modis have chosen their ambitious talent to join the team for the eighth season of the ABB FIA Formula E World Championship and announced Shreyas Raman as the winner.

In early June, the Mercedes-EQ Formula E Team and Modis launched a campaign to find tech talent for the opportunity of a lifetime. Through the ‘Lead the Charge: One season, your career in pole position’ initiative, Modis began the search for a driven, passionate individual to work closely alongside the Mercedes-EQ Formula E Team Principal Ian James for one electrifying season.

Shreyas Raman was chosen as the winner of the campaign and the perfect candidate for this unique opportunity. He is in his final year of his B.S. in Mechanical Engineering at Yale University and is now joining the Mercedes-EQ Season 7 ABB FIA Formula E World Champion Team later this year. Shreyas has gained motorsport experience in race engineering in US Formula 4, where he engineered Yale’s first all-electric car for Formula Hybrid competition – highlighting his skills with a 1st place prize for project management. Shreyas’ passion for motorsports, was evident from his first application, where he said

‘’When I found out about the Lead the Charge opportunity, I knew I had to apply right away. I have grasped every opportunity to build a career at the intersection of motorsport and electric mobility, and I am driven by a strong belief in racing for the future. This opportunity with the Mercedes-EQ Formula E Team is one that I have sought for years and hope to make the most of.’’

Modis’ expert tech recruiting teams from across the globe managed the selection process with several rounds of interviews. As part of the process, 1,200 viewers attended a Live Q&A session with Ian James, where he answered real-time questions about this exciting opportunity and the future of Formula E. The global recruiting teams selected 10 candidates who were invited to a challenging virtual simulation task where their ability to work in a team, and communication & problem-solving skills were put to the test. From this 10, only three finalists were invited to the final round. Jan Gupta, President of Modis commented:

‘’The campaign has been a real success. We’re delighted that so many talented individuals across the globe applied to be part of this fantastic initiative. It has highlighted the overwhelming enthusiasm and excitement for electric engineering and reinforced our belief at Modis that finding the best talent out there is key to drive a sustainable future of tech and engineering. Congratulations to Shreyas, to come out on top of over 2,000 competitive candidates is a huge achievement.’’

“I’m excited about next season with Shreyas joining us. It was a tough decision to take as the level of talent of all entrants was extraordinary, as well as their passion for Tech and Motorsport. Throughout this campaign, Modis has showcased its strong expertise in recruiting with its access to a global talent pool. This allows us, as a team, to attract the best people possible.”

To recognize also the teams behind successful drivers, the 7th Formula E World Championship Season 7 was also concluded by Modis honouring the best engineers across all Formula E teams, with the “Modis Engineer of the Year Award”. This year’s award was handed over to Jeremy Colancon from Rokit Venturi Racing. 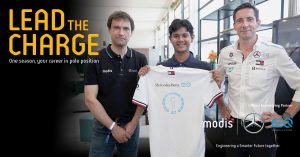