Providing Rate-Limiting Via Bucket4j in Java

Token Bucket is an algorithm used in packet-switched and telecommunications networks. It can be used to check that data transmissions, in the form of packets, conform to defined limits on bandwidth and burstiness . It can also be used as a scheduling algorithm to determine the timing of transmissions that will comply with the limits set for the bandwidth and burstiness

In a review by DZone, Maxim Bartkov, a Java Team Lead, RooX Solutions, gave a more thorough explanation of the “Token Bucket” Algorithm, where it is needed and what are the disadvantages of implementing it.

Every single user has, at least one in a lifetime, faced a problem with limiting their external API – a functionality where we should limit calling to our API for many reasons. Here is what the review explained:

Where Is rate-limiting Needed?

These are the main reasons why to implement rate-limiting, however, there are many other reasons to use it. If we want to realize this function, we can use several algorithms. However, in this review we will only speak about “Token Bucket Algorithm”.

Let’s consider the algorithm in the following example. 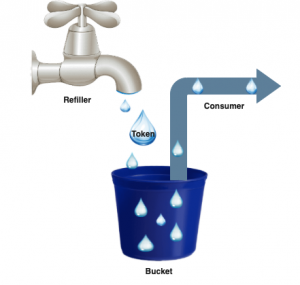 Here is an example of a refiller working with Bandwidth management to refresh tokens every minute: 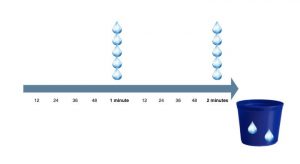 Consume (as action) takes away Tokens from Bucket. The bucket is needed for storing a current count of Tokens, maximum possible count of tokens, and refresh time to generate a new token.

The Token Bucket algorithm has fixed memory for storing Bucket, and it consists of the following variables:

For instance, if we have one gigabyte, we can store 25 million buckets.

The Disadvantage of the Algorithm

Despite all the positives, the algorithm is not perfect. The main problem of the Token Bucket algorithm is called “Burst.” The following example explains:

By ~1 second we consumed 200 tokens and accordingly, we exceeded the limit x2 times! However, this is not a problem at all.

Explanation: If we use our Bucket for only one second, we are over-consuming tokens x2 times (200 tokens), but if we use our bucket for 60 seconds, consumption of the bucket is equal to about 6100 seconds because the Burst problem happened only once. The more you use the bucket, the better it is for its accuracy.

The most important is consuming memory because we have a problem related to “Burst.” A bucket has a requirement about fixed memory size (40 bytes), and we face a problem of “Burst” because to create Bucket we need 2 variables: count of nanoseconds to generate a new token (refill) and volume of a bucket (capacity) – because of that, we can’t realize accuracy contract of Token Bucket.

To understand how to implement the “Token Bucket” algorithm, you can follow the Maxim Bartkov tutorial published on DZone.

Previous Post The Development of Brain-Computer Interface for Robot Control is on its way
Next Post Solo.io Released BumbleBee