The African Development Bank (AFDB), signed a grant agreement with the Ministry of ICT and Innovation in Rwanda to support the Rwanda Coding Academy, a facility established to develop top technology-talent, that will drive an innovation-driven digital economy in the nation. The institution was formed in 2019 as a tool for advancing high-school level kids, allowing them to develop ICT skills, and later on, pursue a career in coding and computer science.

The Academy selects high-performing students that are interested in programming and software, and trains them with a unique learning approach, aiming to strengthen the school-to-work transition by focusing on competency-based learning and providing technical skills as well as soft skills, such as agile learning, critical thinking, self-leadership, mathematics, and entrepreneurship, among others. Rwandan Minister for ICT and Innovation, Paula Ingabire commented:

“The Rwanda Coding Academy is part of our broader vision to grow a local pool of highly talented Pan-African workforce in science, technology and innovation.”

Rwanda’s Coding Academy is only one example of the growing science, technology, engineering and mathematics (STEM) trend that is becoming more and more prevalent across the continent. As countries including Rwanda, Nigeria, and South Africa aspire to insert more innovation into their financial realities, vast resources are directed towards the young populations.

The youngest population as a driver of innovation

Today, only 4-12% of students in Africa graduate with STEM-related degrees, in comparison with Germany’s 36%, Singapore’s 34%, and India’s 32%. As the continent’s population continues to rapidly soar, expected to almost double itself, reaching at least 2.5 billion by 2050, the young crowd is becoming increasingly important, as 60% of Africa’s population is under the age of 25. If properly harnessed, this increase in the working-age population could boost productivity, and establish a stronger, more inclusive economy across the continent.

Today, the majority of youth in Africa do not have stable economic opportunities, and that is only expected to worsen. Out of 420 million people aged 15-35, one-third, over 130 million, are unemployed and discouraged, another third are vulnerably employed, and only one in six is actually receiving a wage for their work. Youth face roughly doubles the unemployment rate of adults, with significant variation by country.

While 10 to 12 million youth enter the workforce each year, only 3.1 million jobs are created, leaving vast numbers of youth unemployed. The consequences of youth unemployment in Africa are pervasive and severe: unemployment translates to poorer living conditions, fuels migration out of Africa, and contributes to conflict on the continent itself. Above all, youth unemployment constitutes a failure to capitalize on one of the continent’s greatest assets for growth: its large and growing population of talented young people. 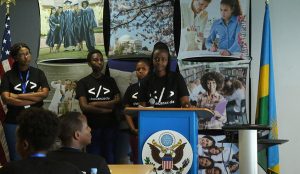 As technology giants including Amazon, Facebook, and Microsoft open new HQ across the continent, alongside major global banks and communication titans, having a STEM-oriented education is a must, in cultivating worthwhile opportunities for local communities. The continent’s special demographic positioning is also crucial for the global economy.  According to the United Nations World Population Prospects, Africa contains 19% of the global population of 15- to 24-year-olds, and by 2035, sub-Saharan Africa will have a working population larger than the entire rest of the world combined. In contrast, as other workforces age. In our ever-digitizing world, this position should not be taken lightly.

From natural resources to human capital

Before COVID rattled the global economy, Africa was undergoing unprecedented growth. In the past decade, Africa was deemed the world’s fastest-growing continent at 5.6% a year, and GDP was expected to rise by an average of over 6 per cent a year between 2013 and 2023.

Albeit the vast influences of the global pandemic, the AFDB projects Real GDP in Africa to grow by 3.4% in 2021, after contracting by 2.1% in 2020. Discussions of the continent’s growth revolve around the evident need to strengthen human capital and establish a new economic reality, one that is not mostly based on the extraction of natural resources, agriculture, and tourism. To become the economic growth engine of the world, the local population must hold robust capabilities that align with the new world, with science, technology, economics, and math leading the way. As hundreds of studies demonstrate, STEM-oriented economies perform strongly on various economic indicators, and it has been established as a development goal in Africa, with the African Union encouraging its members to spend 1% of their GDP on STEM.

The African Union’s Agenda 2063 – a long-term strategic framework that aims to deliver on its goal for inclusive and sustainable development – lists seven aspirations to be achieved by 2063. They include better education, and transformed economies, all based on science and technology-based innovation (STI), the direct derivative of STEM education.

To realize the 2063 agenda, and the overall potential the continent holds, local governments have to devote extreme efforts and resources into STEM-based education systems, starting from an early age, and continuing on throughout the early lives of its population. This could and should be the next frontier in the continent’s historical evolution, and produce the knowledge and human capital that will revitalize local governance, trade, agriculture, health, finance, and energy. The earlier the better.