Zinc-air batteries (ZABs) are among the most promising next-generation battery technologies due to their many advantageous characteristics. These batteries have unique half-open structures, a significant theoretical energy density, flexible electrodes and an inherently aqueous electrolyte. Moreover, in contrast with other materials used in batteries, Zinc (Zn) is less harmful to the environment and more abundant.

These pouch cells, presented in a paper published in Nature Energy, use (101)-facet copper phosphosulfate as a cathode, anti-freezing chitosan-bio cellulosics as super-ionic conductor electrolytes, and patterned Zn as the anode. Jung-Ho Lee, one of the researchers who carried out the study commented: 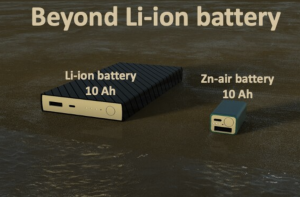 “Previous ZABs employing liquid (6 M KOH) electrolytes failed because of the sluggish kinetics for the oxygen reduction and evolution reactions (ORR/OER) and irreversibility of Zn accompanying the parasitic reactions over wide temperatures. This feature inspired us to develop solid-state electrolytes, such as functionalized bio-cellulose, capable of transferring OH- ions effectively without parasitic reactions.”

The FBN-based electrolyte created by Lee and his colleagues in their previous work exhibited a high ion conductivity of 64 mS cm-1 at room temperature. However, the researchers found that it did not work at subzero and high temperatures due to water freezing and volume expansion issues.

“The two key processes we used (TEMPO oxidation and DBO quaternization) significantly improved the batteries’ anti-freezing characteristics, as well as their resistance toward swelling, compatibility for crosslinking, and ion-discerning property. Water also exists and transfers inside CBCs, but its form is molecular water, not liquid water. As a result, we could obtain superior battery performance and good stability even at -20 °C.”

The CBC-based membrane electrolytes fabricated by Lee and his colleagues were ion-exchanged using a mixture of hydroxide solutions. They thus displayed a lower pH than more conventional alkaline electrolytes. The nano-fibrous CPS(101) prepared by the researchers was specifically synthesized for pouch cells applications.

While the Zn-air pouch cell fabricated by the researchers was operating, if the FBN membrane was unable to form the solid-electrolyte interphase (SEI), CBCs generated a robust SEI layer, which led to a superior cycle life. Moreover, CBCs protected the anode surface from corrosion and side reactions. This could promote longer cycles compared to those achieved by batteries with aqueous electrolytes or other solid-state electrolytes.

While the Zn-air pouch cell fabricated by the researchers was operating, if the FBN membrane was unable to form the solid-electrolyte interphase (SEI), CBCs generated a robust SEI layer, which led to a superior cycle life.

The general requirements for next-generation batteries are a cell-pack-level energy density of >300 Wh kg−1, US$75 kWh−1, a fast-charging capacity in 15 min (at least 80% charging), and the ability to operate at a wide range of temperatures. To meet these requirements, battery designers must overcome a series of limitations, while also ensuring that the batteries are safe, electrochemically/mechanically stable, built with materials that are abundant on Earth and easy to recycle, and functioning well at a broad range of temperatures.

In their paper, Lee and his colleagues introduced one-ampere-hour (Ah) flexible zinc-air pouch cells that could be commercially viable, as they exhibit ultrahigh cell-level energy densities (460 Wh kg cell−1 and 1389 Wh l-1) at the wide range of temperatures (-20 to 80 C), with a high rate capacity of 5-200 mA cm-2 over 6000 cycles for 20% DOD and 1100 cycles for 70% DOD.  After they are tested further, the new zinc-air pouch cells could be produced on a large scale. According to Lee and his colleagues, they could potentially also be used to power drones, electric vehicles or electric short-distance aircraft.