Sergey Brin, Google’s co-founder, loves airships so much that his 2012 debut for Google Glass (RIP) involved a skydiving stunt where a team of jumpers leapt out of a zeppelin floating over downtown San Francisco. And since stepping away from Google, the ninth richest person in the world’s focus has been on building a giant “sky yacht”.

At the time, it was all very secretive, but in the past few years, more details have emerged and a few weeks ago. That’s what we know for Brin’s airships for now:

Although back in 2017 the word on the street was that Brin intended the aircraft to serve at least in part as a luxurious “air yacht” for his family and friends, the LTA website states only humanitarian goals. Unlike jet planes, airships have the ability to land or deliver goods almost anywhere.

In addition, the LTA site says that their airships are intended to serve as a zero-emissions alternative to airplanes, used for both shipping goods and moving people. Climate change has made airships sound more appealing to scientists in recent years. Airships are faster than cargo ships and have fewer emissions than both boats and planes. In fact, airships produce 80% to 90% fewer emissions than conventional aircraft.

“It’s going to be massive on a grand scale,” estimating that Brin’s airship would be about 650 feet long.

At this size, the flying machine would definitely be the world’s largest aircraft — although it would still be smaller than the ill-fated Hindenburg zeppelin of the 1930s, which was 804 feet long. In fact, that’s more than three times the length of a Boeing 747. The airship would cost Brin as much as $150 million to construct. He currently has a net worth of more than $86 billion. 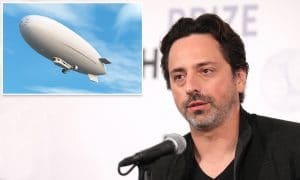 Hydrogen got a bad reputation from the Hindenburg disaster, killing 36 people. Following that disaster, most airships turned to nonflammable helium as a lifting gas, even though hydrogen is much cheaper than helium. However, Brin embraces hydrogen.

For its newest airship, LTA is using the material as fuel to avoid carrying heavy lithium-ion batteries. The resulting airship would still use the traditional helium to provide lift. It was revealed that the company’s plans to build a 1.5-megawatt hydrogen fuel cell propulsion system. Professor Dr Josef Kallo of the German Aerospace Center noted:

“Where we could go something like 125 miles with batteries, we should be able to go nearly 1,000 miles using hydrogen.”

The first prototype airship (Pathfinder 1) could be ready to take to the air from Silicon Valley this year. The LTA registered Pathfinder 1, which will be powered by 12 electric motors and able to carry 14 people.

That makes it about the same size as the 246-foot-long Zeppelin NT, which offers sightseeing tours in Germany and Switzerland and is the only passenger airship currently operating. The flight of LTA’s first fuel cell-powered airship, however, is likely still a ways off, as such an airship has yet to be registered with the Federal Aviation Administration.

Brin’s company has certainly grabbed a lot of headlines, but let’s not forget that this is not the first time airships have been flown in California. While Brin’s idea to keep his project’s aims strictly humanitarian, LTA is thinking about climate change-conscious travellers and have the potential to renew interest in airships for passenger travel.