Windows 10 Insider Preview Build 21364 was released to Windows Insiders in the Dev Channel.

The Windows Subsystem for Linux now includes the first preview of support for GUI applications. This means you can now run your favourite GUI editors, tools, and applications, to develop, test, build and run your Linux apps. Check the demo below.

Partnered with the Microsoft Edge team, Build 21364 will now support process classification in Task Manager. The classification is broken down into several different components like Tabs, Browser processes, Utility plugins, Dedicated & Service workers etc. It also includes separate icons for each process to help you identify them including a favicon for the website. 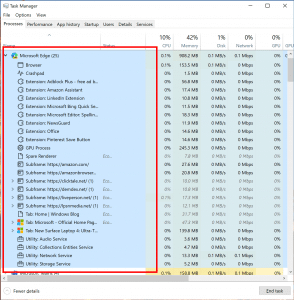 NOTE: This feature is available to users that are running the latest Microsoft Edge Canary or Dev builds. Insiders can download the latest version here. 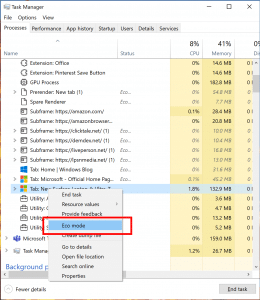 “Eco Mode” is the new experimental feature of Task Manager that provides users with an option to throttle process resources. It also helps identify apps that are already running in Eco mode. This feature is helpful when you notice an app consuming high resources and would like to limit its consumption so that the system gives priority to other apps which will lead to faster foreground responsiveness. Here are the steps how to enable Eco mode for any process:

NOTE: This feature is rolling out to a subset of Insiders in the Dev Channel at first, to help us quickly identify issues that may impact performance and reliability.

You can switch to 50-on layout from [⚙] > [50-on]. This feature also provides alphabet and symbol views designed specifically for the layout. You may notice some known issues with the full-width space using the Shift key. The Microsoft team is actively working on addressing them.

You can go and check out the whole Windows Insider Program documentation here, including a list of all the new features and updates released in builds so far.

Previous Post Can you trick Tesla’s Autopilot into operating without driver?
Next Post The coolest Tech Startups Preaching Sustainability in 2021