AWS has just opened its new Center for Quantum Computing at the California Institute of Technology. With the help of  experienced hardware engineers, quantum theorists and software developers AWS wants to “push the boundaries of quantum R&D.”

Everyone who works in the centre will be able to make, test and operate quantum processors at the facility and also to improve the processes for controlling quantum computers and to overcome technical challenges.

The two technical leads of the Center are Oskar Painter, a Professor of Applied Physics, Head of Quantum Hardware, and Fernando Brandao, a Professor of Theoretical Physics, Head of Quantum Algorithms. Nadia Carlsten, head of product at the AWS Center for Quantum Computing, said in a blog post that the customers are eager to collaborate with the centre and build up internal expertise with the understanding that it’s still early days for the technology.

In fact, quantum information can be encoded in particles found in nature, such as photons or atoms, but at the AWS Center for Quantum Computing, researchers are focusing on superconducting qubits – electrical circuits elements constructed from superconducting materials. Another important metric is the computer’s clock speed, or the time required to perform quantum gate operations. For instance, faster clock speeds mean solving problems faster.

The ultimate measure of the quality of AWS qubits will be the error rate, or how accurately the quantum gates could be performed.

Caltech has been a leader in quantum technology since the origin of the idea. Richard Feynman was a Caltech physics professor and one of the first people to talk about the idea of quantum computing. This collaboration will connect the commercial side of quantum computing with fundamental research going on at Caltech, according to an article from the institute announcing the opening of the centre.  Painter commented in the article:

“If we were to just take today’s ideas and go forward with them, we would create a dinosaur of a quantum computer. We need to be closely connected and tied into these basic research efforts.”

Caltech’s main mission is to create a computer architecture that builds quantum error correction into the hardware. According to Painter, researchers will address the ability to scale quantum computing by many orders of magnitude as well as figure out what problems are best solved with the technology. This is the first corporate-partnership building on the Caltech campus, and it shows Caltech’s interests in bringing fundamental science to the global market. 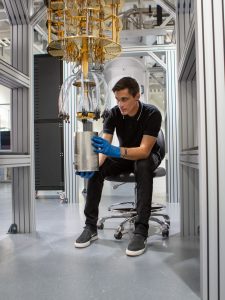 The institute expects that the centre will support Caltech students and early career scientists via scholarships, internships and seminars.

AWS also noted that they have figured out that those who are most excited about the potential for quantum are also realistic about the challenges of realizing the full potential of this technology. The team is eager to collaborate and fully committed to this exciting journey toward fault-tolerant quantum computing.