Apple has given a lot with the iOS 15.4 beta and one of the newest features is the ability to officially use Face ID With a Mask. This support is also included for recognizing multiple pairs of glasses.

Until now, iPhone Face ID hasn’t been designed to work when wearing a mask. This means customers need to rely on entering their passcode or owning an Apple Watch to unlock their phones with a covered face.

Hence, we are all excited to learn that the giant is testing Face ID With A Mask in the iOS 15.4 beta. According to 9to5Mac, this new feature works by recognizing our “unique features around the eye area to authenticate.” Apple commented:

Face ID is most accurate when it’s set up for full-face recognition only. To use Face ID while wearing a mask, the iPhone can recognize the unique features around the eye area to authenticate.

* Note: Having a mask is not mandatory to set up the feature, however, 9to5Mac suggests that the feature appears to be only available for iPhone 12 and later.

Additionally, you can toggle off Face ID With a Mask after setting it up and toggle it back on without having to scan in your face again. Here’s how the process looks: 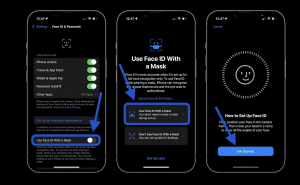 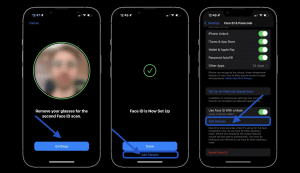 Because the feature works by recognizing and authenticating the unique areas around your eyes, it doesn’t work with sunglasses.