C is a high-level and general-purpose programming language that is ideal for developing firmware or portable applications. Originally intended for writing system software, C was developed at Bell Labs by Dennis Ritchie for the Unix Operating System in the early 1970s.

Go or Golang is a free and open-source programming language created at Google. It is a compiled, statically typed language in the tradition of Algol and C, with garbage collection, limited structural typing, memory safety features and CSP-style concurrent programming features added.

C++ is a general-purpose object-oriented programming language developed by Bjarne Stroustrup. It is considered to be an intermediate-level language, as it encapsulates both high and low-level language features.

Java is a general-purpose computer programming language first developed by James Gosling at Sun Microsystems, which is now a part of Oracle Corporation. The language has developed much of its syntax from C and C++.

JavaScript is a scripting language that is used mainly inside web browsers. Java and JavaScript are not the same things; in fact, they are not even related.

Pascal is an imperative and procedural programming language, which Niklaus Wirth designed in 1968–69 and published in 1970, as a small, efficient language intended to encourage good programming practices using structured programming and data structuring.

PHP is a server-side scripting language designed primarily for web development but also used as a general-purpose programming language. Originally created by Rasmus Lerdorf in 1994.

Scala is a general-purpose programming language. Scala has full support for functional programming and a strong static type system. Designed to be concise, many of Scala’s design decisions were inspired by criticism of Java’s shortcomings.

Kotlin is a statically-typed programming language that runs on the Java virtual machine for modern multi-platform applications. A team of JetBrains programmers based in Saint Petersburg, Russia is its primary developer.

R is a programming language and free software environment, designed by Ross Ihaka and Robert Gentleman, for statistical computing and graphics that is supported by the R Foundation. One of R’s strengths is the ease with which publication-quality plots can be produced, including mathematical symbols and formulas if needed. 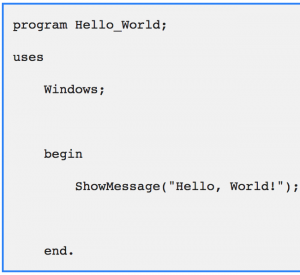 Delphi is both an object-oriented programming language and an Integrated Development Environment created by Embarcadero. It originated from the Pascal language, which then became Object Pascal. Delphi is an alternative to languages such as Visual Basic offering development with both rapidity and good quality.

allows matrix manipulations, plotting of functions and data, implementation of algorithms, creation of user interfaces, and interfacing with programs written in other languages.

Visual Basic .NET is a multi-paradigm, object-oriented programming language, implemented on the .NET Framework. Microsoft launched VB.NET in 2002 as the successor to its original Visual Basic language.

Perl 6 is a member of the Perl family of programming languages designed by Larry Wall. It was designed in order to tackle the caveats that Perl had accumulated during its now long history. Those caveats were mainly due to a requirement of backward compatibility of successive versions of Perl.

jQuery is a JavaScript library. It was created to make it easier and simpler to write JavaScript and HTML. JQuery works on most web browsers. It was invented by John Resig.