Since the start of the pandemic companies around the world have been forced to adopt new working methods. Video conferencing, emails and chat boxes have become vital communication tools. The face-to-face contact will be yet replaced by video calls – especially when it comes to learning and training. However, a team of developers working in the North East is combining its expertise in making video games with its knowledge of training and learning techniques to create a virtual reality experience designed for businesses. 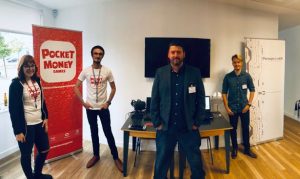 In GEMBA, business leaders and employees can learn new skills, participate in conferences, or carry out one-to-one training with colleagues. The experience also keeps the learner engaged through their knowledge of video games. Frankie added:

“All the cool stuff from games we can put into it because this is multiplayer. We still use game engines and we use the gamification of achievements. Then we take everything we know from games such as how do we keep you engaged and make it fun.”

Frankie explains how the team used a mechanic from the zombie survival game Left 4 Dead to help solve one of the more challenging problems in teaching.

“The thing we took from games is something called Stretch and Support. A good teacher should be able to push you as a student, and push you to the next level while a student not doing so well should be supported. However, most teachers can’t achieve that.”

Frankie argues that when a teacher has a large number of students, not all of them are at the same level. Some can be pushed to excel, others than need

“What Left 4 Dead did was that, if you are very good, it throws more zombies at you. If you aren’t very good it gives you some help. Our artificial intelligence system, Stretch and Support, identifies if you are doing well and adapts.”

GEMBA’s learning solutions can also be brought to a virtual lecture theatre, recreate daily performance meetings, or replicate whole manufacturing processes for those working on a factory floor.

The company has three versions of this product. The first is the Masterclass, the second offers more customizable options, while the third is a fully bespoke product which Frankie says can be “pretty much anything you want”. 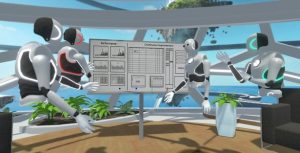 Toyota has used the system to map out one of their factory floors, meaning employees from around the world can see how the factory operates, what staff at a site are doing well and what can be improved. Along with Toyota, The Learning Network has many clients, including Coca Cola, IBM, Nestle, Volvo, Carlsberg, Adidas, and HP.

GEMBA also allows business leaders to network with others. The Learning Network believes this technology saves on average around £1,800 per person on travelling to and from events. Frankie also added:

“I think this is the turning point. We have gone through a big rebrand in June. The switch for Covid when it happened, it was fortuitous that the CEO had done a year of development, which put us at a huge advantage. We sell more tickets at the virtual events than the real events.”

GEMBA also shows that the North East can compete with international tech firms from Silicon Valley in the VR space.