Here is how a young woman with the uncommon talent of applying poetic imagination to science envisioned the Symbolic Medea that would become the modern computer, sparking the birth of the digital age.

Augusta Ada King, Countess of Lovelace, born December 10, 1815, later came to be known simply as Ada Lovelace. Today, she is celebrated as the world’s first computer programmer — the first person to marry the mathematical capabilities of computational machines with the poetic possibilities of symbolic logic applied with imagination. This peculiar combination was the product of Ada’s equally peculiar parenting.

Eleven months before her birth, her father, the great Romantic poet and scandalous playboy Lord Byron had reluctantly married her mother, Annabella Milbanke, a reserved and mathematically gifted young woman from a wealthy family. But shortly after Ada was conceived, Lady Byron began suspecting her husband’s incestuous relationship with his half-sister, Augusta. Five weeks after Ada’s birth, Annabella decided to seek a separation.

Ada was never to meet her father, who died in Greece at the age of thirty-six. The girl was raised by her mother, who was bent on eradicating any trace of her father’s influence by immersing her in science and math from the time she was four. At twelve, Ada became fascinated by mechanical engineering and wrote a book called Flyology, in which she illustrated with her own plates her plan for constructing a flying apparatus.

When she was only seventeen, Ada attended one of legendary English polymath Charles Babbage’s equally legendary salons. There, amid the dancing, readings, and intellectual games, Babbage performed a dramatic demonstration of his Difference Engine, a beast of a calculating machine he was building. Ada was instantly captivated by its poetic possibilities, far beyond what the machine’s own inventor had envisioned. 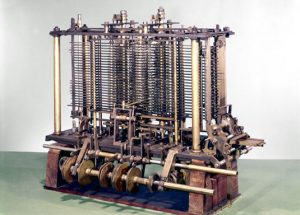 Ada’s love of both poetry and math primed her to see beauty in a computing machine. She was an exemplar of the era of Romantic science, which was characterized by a lyrical enthusiasm for invention and discovery.

…. It was a time not unlike our own. The advances of the Industrial Revolution, including the steam engine, mechanical loom, and telegraph, transformed the nineteenth century in much the same way that the advances of the Digital Revolution — the computer, microchip, and Internet — have transformed our own. At the heart of both eras were innovators who combined imagination and passion with wondrous technology, a mix that produced Ada’s poetical science and what the twentieth-century poet Richard Brautigan would call “machines of loving grace”. 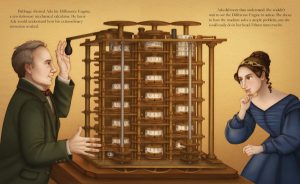 In her 1843 supplement to Babbage’s Analytical Engine, simply titled Notes, she outlined four essential concepts that would shape the birth of modern computing a century later. First, she envisioned a general-purpose machine capable not only of performing pre-programmed tasks but also of being reprogrammed to execute a practically unlimited range of operations — in other words, as Isaacson points out, she envisioned the modern computer.

Her second concept would become a cornerstone of the digital age — the idea that such a machine could handle far more than mathematical calculations; that it could be a Symbolic Medea capable of processing musical and artistic notations.

Her third innovation was a step-by-step outline of the workings of what we now call a computer program or algorithm. This last work of hers was and still remains most momentous — the question of whether machines can think independently, which we still struggle to answer in the age of Siri-inspired fantasies like the movie Her.

Ada died of progressively debilitating uterine cancer in 1852 when she was thirty-six — the same age as Lord Byron. She requested that she be buried in a country grave, alongside the father whom she never knew but whose poetical sensibility profoundly shaped her own genius of “poetical science.”