A very strange thing happened on the internet the day President Joe Biden was sworn in. A shadowy company announced to the world’s computer networks that it was now managing a colossal, previously idle chunk of the internet owned by the U.S. Department of Defense.

That real estate has since more than quadrupled to 175 million addresses—about 1/25th the size of the current internet. Doug Madory, director of internet analysis at Kentik, a network operating company, commented:

“It is massive. That is the biggest thing in the history of the internet. It’s more than twice the size of the internet space actually used by the Pentagon.”

After weeks of wonder by the networking community, the Pentagon has now provided a very terse explanation for what it’s doing. But it has not answered many basic questions, beginning with why it chose to entrust the management of the address space to a company that seems not to have existed until September.

The military hopes to “assess, evaluate and prevent unauthorised use of DoD IP address space,” said in a statement Brett Goldstein, chief of the Pentagon’s Defense Digital Service, who is running the project.

The Pentagon periodically contends with unauthorized squatting on its space, in part because there has been a shortage of first-generation internet addresses since 2011; they now sell at auction for upwards of $25 each.

Cybersecurity experts have speculated that the Pentagon may be using the newly advertised space to create “honeypots,” machines set up with vulnerabilities to draw hackers. Or it could be looking to set up dedicated infrastructure—software and servers—to scour traffic for suspect activity. What a Pentagon spokesman could not explain is why the Defense Department chose Global Resource Systems LLC, a company with no record of government contracts, to manage the address space. 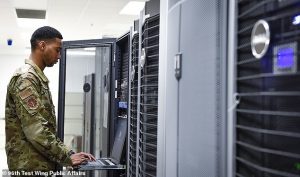 The company did not return phone calls or emails from The Associated Press. It has no web presence, though it has the domain grscorp.com. Its name doesn’t appear on the directory of its Plantation, Florida, domicile, and a receptionist drew a blank when an AP reporter asked for a company representative at the office earlier this month. She found its name on a tenant list and suggested trying email. Records show the company has not obtained a business license in Plantation.

The only name associated with it on the Florida business registry coincides with that of a man listed as recently as 2018 in Nevada corporate records as a managing member of a cybersecurity/internet surveillance equipment company called Packet Forensics. The company had nearly $40 million in publicly disclosed federal contracts over the past decade.

Raymond Saulino is also listed as a principal in a company called Tidewater Laskin Associates, which was incorporated in 2018 and obtained an FCC license in April 2020. It shares the same Virginia Beach, Virginia, addresses in corporate records as Packet Forensics. The two have different mailbox numbers. Calls to the number listed on the Tidewater Laskin FCC filing are answered by an automated service. Saulino did not return phone calls seeking comment. It is believed that Saulino was retired.

In 2011, Packet Forensics and Saulino, its spokesman, were featured in a story because the company was selling an appliance to government agencies and law enforcement that let them spy on people’s web browsing using forged security certificates.

The company continues to sell “lawful intercept” equipment, according to its website. One of its current contracts with the Defense Advanced Research Projects Agency is for “harnessing autonomy for countering cyber-adversary systems.” A contract description says it is investigating technologies for conducting safe, non-disruptive, and effective active defence operations in cyberspace.

Despite an internet address crunch, the Pentagon has shown no interest in selling any of its address space, and a Defense Department spokesman, Russell Goemaere, told the AP on Saturday that none of the newly announced space has been sold.