A mode is supposed to represent the data, as it is supposed that the value which has occurred the most number of times, can be considered as the characteristic of that data. The mode doesn’t take into account every value of the dataset, but only the one which occurs the highest number of times.

MEDIAN OF THE DATA

Suppose ’n’ is the number of data points. The formula for the median is,

MEAN OF THE DATA

Skewness is a measure of the spread of data. Skewness represents the asymmetry of data. The exactly symmetric curve has skewness = 0.

Skewness = 0: When the value from the skew() function comes out to be 0, that is when the curve is said to be normally distributed, and the distribution is called Z distribution or Normal distribution. In this case,

Below is given some data of ages of 37 people. Try visualizing what this data looks like. 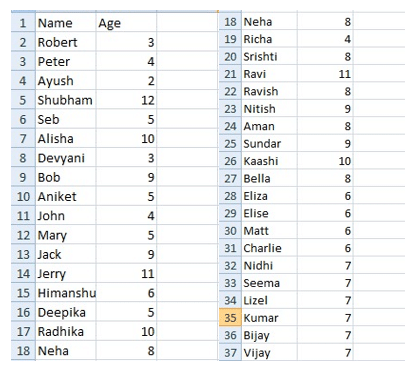 Let’s calculate the mean, median, and mode of this given data. Using numpy, pandas, and matplotlib for the complete process. Read the data set from the local drive. Calculating the mean, mode and median with Python, mean = median = mode.