ZEIT rebranded to Vercel a day ago. You probably best know ZEIT as the creators and maintainers of the popular Next.js React framework.

“This new identity aligns with our new focus — to provide the ultimate workflow for developing, previewing, and shipping Jamstack sites,” said in the company’s blog.

Towards that goal, the rebranded Vercel also announced that they secured $21M in Series A funding. Among the lead investors are Accel and CRV, alongside Naval Ravikant, Nat Friedman, Jordan Walke, and others.

Zeit then started in 2016. The main goal of the company was simple – empowering solo developers to effortlessly deploy their apps.

“Since then, we have invested all our energy into building products that simplify developer experience. Our open-source React framework Next.js is the most notable of them”, said the Vercel’s team in the blog.

In fact at organizations big and small, Next.js has become the framework to build React apps due to its simple learning curve, versatility, and performance. Today, it powers over 35,000 sites at companies like Uber, Nike, and Starbucks. 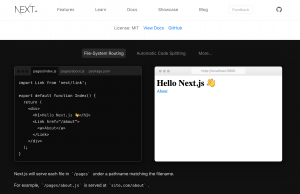 The Renewed Focus of the rebranded company is: “Develop. Preview. Ship”

“From observing our community, we know that frontend engineers are more productive than ever. Frameworks like Next.js eliminate boilerplate, and serverless APIs give them full-stack powers”, explained the team of Vercel.

Now Vercel aims to enable teams to develop, preview, and ship their apps faster, and with confidence.

“Projects that once took months to develop, are getting completed by lean teams of frontend engineers and designers in days. These teams want to iterate rapidly, and collaboratively. They want to develop, preview, and ship at the speed of thought. They don’t want to leave their browsers, and other tools they’re already working with. That’s where we come in.”