UNIX, the Bell Labs operating system that revolutionized computing systems by becoming the dominant OS on mainframes, workstations and web servers formed the foundation for the internet and cloud infrastructure we know today.

However, many don’t know that the UNIX team also developed another operating system back in the 1980s. This OS may not be as famous as UNIX, but it has been highly influential in its own ways. The system is the Plan 9 OS from Bell Labs which will have a new home.

Starting in the late 1980s, a group led by Rob Pike and UNIX co-creators Ken Thompson and Dennis Ritchie developed Plan 9. Their motivation was two-fold: to build an operating system that would fit an increasingly distributed world and do so cleanly and elegantly. The plan was to implement this new design from scratch. Later on, the result was named Plan 9 from Bell Labs inspired by the cult B-movie “Plan 9 from Outer Space”.

Plan 9 is built around an entirely different model from that of conventional operating systems. The OS is structured as a collection of loosely coupled services, which may be hosted on different machines. Another key concept in its design is that services can be mapped on to local names fixed by convention so that programs using those services need not change if the current services are replaced by others providing the same functionality. 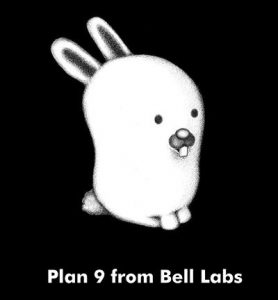 Plan 9’s innovations found their way into many commercial OSes: the concept of making OS services available via the file system is now pervasive in Linux; Plan 9’s minimalist windowing system design has been replicated many times; the UTF-8 character encoding used universally today in browsers was invented for, and first implemented in, Plan 9.

Plan 9’s distributed design also lives on in current Nokia Bell Labs projects such as World Wide Streams where stream processing programs are seamlessly deployed across a network of compute nodes geographically spread across 5G edges core clouds. But starting this week, Plan 9 will have a new home in the space it helped define: cyberspace.

There is indeed an active community of people who have been working on Plan 9 and who are interested in the future evolution of this groundbreaking operating system. That community is organizing itself bottom-up into the new Plan 9 Foundation, which is making the OS code publicly available under a suitable open-source software license.