“Another step towards a future where space is accessible to all of us”, said Bezos about the first all-civilian mission to orbit.

Congratulations to @ElonMusk and the @SpaceX team on their successful Inspiration4 launch last night. Another step towards a future where space is accessible to all of us.

The crew of Inspiration4 had an incredible first day in space. They have completed more than 15 orbits around planet Earth since liftoff and made full use of the Dragon cupola.

“Missions like Inspiration4 help advance spaceflight to enable ultimately anyone to go to orbit and beyond”, sait Elon Musk after the successful launch of Inspiration4.

Inspiration4 is the world’s first all-civilian mission to orbit. The mission will be commanded by Jared Isaacman, the 38-year-old founder and Chief Executive Officer of Shift4 Payments and an accomplished pilot and adventurer. Named in recognition of the four-person crew that will raise awareness and funds for St. Jude Children’s Research Hospital, this milestone represents a new era for human spaceflight and exploration. 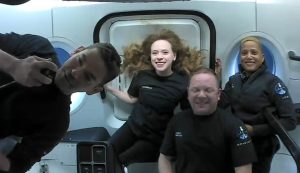 Jeff Bezos founded Blue Origin with the vision of enabling a future where millions of people are living and working in space to benefit Earth. In order to preserve Earth, Blue Origin believes that humanity will need to expand, explore, find new energy and material resources, and move industries that stress Earth into space. Blue is working on this today by developing partially and fully reusable launch vehicles that are safe, low cost and serve the needs of all civil, commercial and defense customers.

Richard Branson is the co-founder of Virgin Galactic – an American spaceflight company. It is headquartered in California, USA, and operates from New Mexico. The company is developing commercial spacecraft and aims to provide suborbital spaceflights to space tourists.