‘The Anonymous collective is officially in cyberwar against the Russian government.’

Approximately 30 minutes later, they announced that they had taken down the website of the Kremlin-backed TV channel RT, which broadcasts in Britain and has been extremely criticized for its coverage.

MailOnline tried to access the site this morning, however, it was showing as inaccessible displaying an error message that says ‘this site can’t be reached. 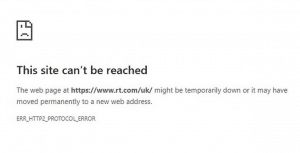 When MailOnline attempted to access the RT site this morning, it was still inaccessible and only displayed an error message that said ‘this site can’t be reached. Photo Credits: DailyMail

The cyberwar declaration raises the prospect that Russia might be subjected to systematic hacking attempts in the coming days or even weeks.

Prior to the Ukrainian invasion on Thursday, the country’s government and banks were targeted by a massive cyberattack that was believed to be held by Russia. People on social media responded positively to Anonymous’s cyberwar declaration against Putin.

The group also announced that they had taken down the website of the Kremlin-backed TV channel RT, which broadcasts in Britain and has been heavily criticized for its coverage. Photo Credits: DailyMail

Anonymous has previously targeted groups including the Ku Klux Klan and Islamic extremists.  Members are also known as ‘Anons’ and are distinguished by their Guy Fawkes masks.