An ongoing campaign has been found to leverage a network of websites acting as a “dropper as a service” to deliver a bundle of malware payloads to victims looking for “cracked” versions of popular business and consumer applications. Researchers from cybersecurity firm Sophos said in a report published last week:

“These malwares included an assortment of click fraud bots, other information stealers, and even ransomware.”

The attacks work by taking advantage of a number of bait pages hosted on WordPress that contain “download” links to software packages, which, when clicked, redirect the victims to a different website that delivers potentially unwanted browser plug-ins and malware, such as installers for Raccoon Stealer, Stop ransomware, the Glupteba backdoor, and a variety of malicious cryptocurrency miners that masquerade as antivirus solutions. The researchers’ team also said:

“Visitors who arrive on these sites are prompted to allow notifications; If they allow this to happen, the websites repeatedly issue false malware alerts. If the users click the alerts, they’re directed through websites until they arrive at a destination that’s determined by the visitor’s operating system, browser type, and geographic location.” 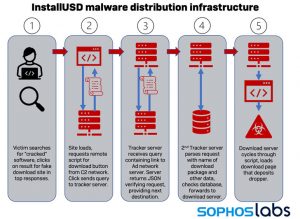 Using techniques like search engine optimization, links to the websites appear at the top of search results when individuals search for pirated versions of a wide range of software apps. The activities, considered to be the product of an underground marketplace for paid download services, allows entry-level cyber actors to set up and tailor their campaigns based on geographical targeting.

Traffic exchanges, as the distribution infrastructure is also called, typically require a Bitcoin payment before affiliates can create accounts on the service and begin distributing installers, with sites like InstallBest offering advice on “best practices,” such as recommending against using Cloudflare-based hosts for downloaders, as well as using URLs within Discord’s CDN, Bitbucket, or other cloud platforms. 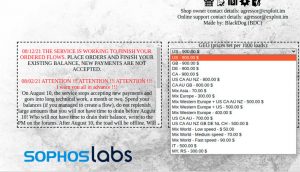 On top of that, the researchers also found some of the services that act as “go-betweens” to established malvertising networks that pay website publishers for traffic. One such established traffic supplier is InstallUSD, a Pakistan-based advertising network, which has been linked to a number of malware campaigns involving the cracked software sites.

This is far from the first time “warez” websites have been put to use as an infection vector by threat actors. Earlier this June, a cryptocurrency miner called Crackonosh was found abusing the method to install a coin miner package called XMRig for stealthily exploiting the infected host’s resources to mine Monero.

A month later, the attackers behind a piece of malware dubbed MosaicLoader were found targeting individuals searching for cracked software as part of a global campaign to deploy a fully-featured backdoor capable of roping the compromised Windows systems into a botnet.