Here are The Best Countries in Europe for Women to Work

According to a new study conducted by Reboot Online, Bulgaria is the best European country for women to work. 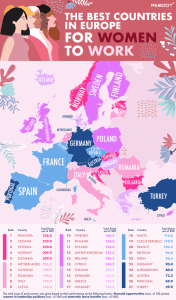 The study evaluated a variety of factors that contribute to women’s success in the workforce.

It created a points-based index to determine which countries on the continent offered the best prospects for female professionals, assessing economic opportunity, including the gender pay gap, women in leadership, and maternity leave.

Bulgaria scored 236.6 points out of a possible 300 after offering the best maternity leave package in Europe. It also ranked second-best for women in leadership, losing out only to Norway which boasts one of the most egalitarian societies in the world.

Forming up the top five was Estonia, Norway and Slovakia, and the Netherlands, while Slovenia, Romania and Italy ranked sixth, seventh and eighth in Europe. Following up in ninth and tenth place were Latvia and Sweden.

On the opposite end of the scale was Turkey, which scored just 39.9 out of 300. Despite its poor performance, the country earned more points for women in leadership than countries traditionally known for being equal such as Germany and Austria.

Previous Post How to Reduce Complexity of Big Data? Researchers Have the Answer
Next Post The first online-only Hack TUES edition has launched