Powered by IBM Watson technologies, the artificial intelligence-powered astronaut assistant successfully completed the next step in its research on the effects of stress and isolation during long-term missions. 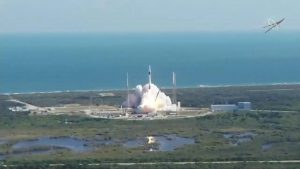 CIMON-2 was launched to the ISS on December 5, 2019, from the Kennedy Space Center in Cape Canaveral, Florida, on board the supply flight CRS-19. It is scheduled to remain there for up to three years. Nearly two months after the successful deployment of CIMON-2 in February, the project team has now completed its initial analysis.

CIMON-2 was tested on its autonomous flight capabilities, voice control of navigation and other tasks. For the first time, CIMON-2 was able to navigate by verbal commands to a specific point within the Columbus module, regardless of where it is located. This was demonstrated when, during the commissioning of the new hardware and software, Parmitano asked CIMON-2 to fly to the Biological Experiment Laboratory (Biolab) within the Columbus module.

Another task for CIMON-2 was to take photos and videos inside the European module of the ISS on command and then show them to the astronaut. With these skills, CIMON-2 will be able to support scientific experiments on the ISS in the future.

The current version of the astronaut assistant includes more sensitive microphones and a more developed sense of orientation than its predecessor (CIMON-1). The AI capabilities and stability of its complex software have also been significantly improved in CIMON-2. The autonomy of the battery-powered assistant has been increased by about 30 percent. In addition, CIMON-2 can detect emotions and language tones with Watson Tone Analyzer, enabling the AI assistant to react empathically to its conversational partners.

A further goal of the project is to explore how an intelligent assistant like CIMON can reduce stress for astronauts. As a partner and companion, CIMON could support them in their extensive work on experiments, maintenance and repairs, reducing their stress exposure. CIMON provides a possible basis for social assistance systems in space, which could reduce stress caused by isolation or group dynamic interactions during long-term missions, a benefit that could possibly be applied on Earth as well.

The team of DLR, Airbus, IBM and scientific partners LMU and the ESA User Support Centrum Biotesc are very satisfied with the performance of CIMON-2 so far. The new, improved hardware and complex software worked very well. This renewed success for the CIMON project is another pioneering achievement in the use of AI in space. 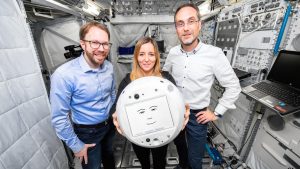 The development and construction of the interactive astronaut assistant CIMON was commissioned by the Space Agency at the German Aerospace Center (DLR) with funds from the Federal Ministry of Economics and Energy and implemented by Airbus in Friedrichshafen and Bremen. IBM Watson technologies include Watson Visual Recognition, Watson Speech to Text, Watson Text to Speech, Watson Assistant and Watson Tone Analyzer, all running on IBM Cloud. The human aspects of the assistance system were co-developed and supervised by scientists of the Clinical Center of the Ludwig-Maximilians-University Munich (LMU). The ESA User Support Centrum Biotesc at the Lucerne University of Applied Sciences in Switzerland has ensured that CIMON works perfectly in the Columbus module of the ISS and cooperates with the astronauts.

In August 2016, a project team of about 50 people from DLR, Airbus, IBM, Biotesc, ESA and the LMU began working on CIMON-1. The prototype of the technology experiment was on board the ISS from July 2, 2018, to August 27, 2019, and made its 90-minute world premiere on November 15, 2018, with German ESA astronaut Alexander Gerst. Following its successful mission, CIMON-1 was declared a German cultural asset and returned to Earth. CIMON-2 was completed in less than a year by a staff of about 20 members of the CIMON “family.” CIMON-1 will soon be presented to the public in museums and exhibitions to help the CIMON family grow and inspire future generations to study STEM subjects.

CIMON is a technology experiment to support astronauts and increase the efficiency of their work. CIMON is able to show and explain information such as instructions for scientific experiments and repairs. Voice-controlled access to documents and media allows the astronauts to keep both of their hands free. CIMON can also be used as a mobile camera to save time. It can perform routine tasks, such as documenting experiments, searching for objects and taking inventory. CIMON is also able to see, hear, understand and speak. Its “eyes” include a stereo camera used for orientation, a high-resolution camera for facial recognition and two lateral cameras for imaging and video documentation. Ultrasonic sensors measure distances to detect potential collisions. CIMON’s “ears” consist of eight microphones used to detect the direction of sound sources, plus an additional directional microphone for voice recognition. Its “mouth” is a speaker that can be used to speak or to play music.

CIMON is not equipped with self-training capabilities and requires active human instruction. The AI used for autonomous navigation was contributed by Airbus and is designed for movement planning and object recognition. Twelve internal rotors allow CIMON to move and revolve freely in all directions. This means it can turn toward the astronaut when addressed. It can also nod or shake its head and follow the astronaut autonomously or on command.