“Our goal is to enable a person with paralysis to use a computer or phone with their brain activity alone,” says Neuralink.

Neuralink, Elon Musk’s brain implant company, has released a video showing how it has taught Pager, a nine-year-old macaque – to play the video game Pong with its mind.

The video follows Mr Musk’s assertion in February that the company has “a monkey with a wireless implant in their skull with tiny wires” that it uses to play video games.

Neuralink Corporation previously claimed to have implanted coin-sized wireless sensors inside the brains of two pigs, describing the sensors as “a Fitbit in your skull with tiny wires”.

At the time of the video, Pager was six weeks on from having had the devices installed – one in each side of his brain – and in that time has learned to interact with a computer for a “tasty banana smoothie” delivered through a straw. The implants work by recording signals in the monkey’s motor cortex that normally coordinates hand and arm movements.

“Our goal is to enable a person with paralysis to use a computer or phone with their brain activity alone.”

The billionaire told people on the call that an inspector from the US Department of Agriculture described the company’s laboratory as “the nicest monkey facility” they had ever examined.

“One of the things we’re trying to figure out is whether we can have the monkeys playing mind Pong with each other? That would be pretty cool.”

The tiny implant has more than 3,000 electrodes, attached to flexible threads measuring about a tenth of the size of a hair, capable of monitoring about 1,000 neurons. The aim is to create a brain-computer interface, and it is being trialled in order to treat people with brain and spinal injuries. 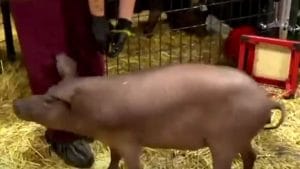 Neuralink unveils a pig with a computer chip in the brain. Photo Credit: Neuralink

Neuralink’s head surgeon, Dr Matthew MacDougall, said the first trials would focus on patients with paralysis or paraplegia. According to the company, the technology could contribute to finding a cure for neurological conditions such as Alzheimer’s, dementia and spinal cord injuries.

Some of the more conceptual ideas touted by Musk are not yet considered feasible by scientists, including a kind of “save state” in the brain.