Getting a computer science degree is no longer the only path to a software engineering role. Several of the biggest tech companies don’t require a college degree to land a job and accept coding Bootcamp graduates or candidates who have completed some other forms of instruction and education.

The number one coding Bootcamp attended by employees of the Big Five was Code Fellows. Eleven per cent of Code Fellows’ graduates are employed at the Big Five. This Bootcamp had about 2,000 alumni listed on LinkedIn. It had a similar percentage of alumni employed at Stanford University and was higher compared to Cornell University’s 9.44% and the University of California-Berkeley’s 8.68%. 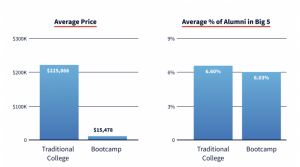 According to Switchup, one of the biggest draws of coding boot camps over college is the price tag. The most expensive boot camps cost less than $30,000, while top universities can cost more than $250,000. Sung Rhee, founder and CEO of Optimal, the parent company of Switchup, wrote in a post:

What is more, the survey found that certain prestigious universities, including Stanford University, Cornell University, and University of California-Berkeley, had higher rates of employment at the Big Five, but overall, the average employment rates for computer science graduates and Bootcamp graduates were similar. The average percentage of alumni from a traditional college employed at a Big Five company was 6.60% and the percentage for Bootcamp alumni was 6.03%.