A team of researchers at Korea’s LG Electronics, working with a group at Fraunhofer-Gesellschaft, has successfully sent data 100 meters over a 6G signal. Officials at LG have posted details of their test of the next step wireless transmission technology on their company news page.

As 5G networks for cellular service have slowly made their way around the globe, engineers at multiple telecommunications companies have been hard at work on next-generation 6G communications technology. Moving to the new technology is expected to push data transmission speeds to 50 times faster than 5G. It is also expected to cut latency to just 10% that of 5G, making conversations sound more natural. And the new standard is also expected to improve the accuracy of the data sent. Together, these improvements could drive a wave of new “Internet of Everything” development, with new devices aimed at both the home and workplace. 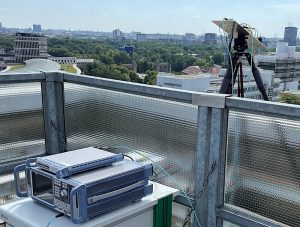 Scientists have long recognized that achieving the next step in transmission technology will be more difficult than those that came before due to a major problem with 6G signaling; it is short-range due to loss of power as it is transmitted. For this reason, the global standards body for data communications has set its commercialization date for 2025, while most in the field do not expect actual sales to begin until 2029 or later.

Just a few months ago, a team at Samsung set a new distance record for sending 6G signals—15 meters. The researchers on this new effort have gone much farther, sending a signal 100 meters from the top of one tall building to another tall building. And the key to their success, the company claims, is an amplifier jointly developed with Fraunhofer-Gesellschaft, which is capable of generating stable signals at up to 15 dBm in frequency ranges between 155 and 175 GHz. The team was also able to demonstrate adaptive beamforming—a necessary feature for allowing changing channels along with the position of a receiver.

They also were able to conduct high-gain antenna switching, which is necessary for combining multiple signals and sending them to a targeted antenna. 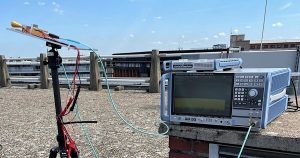 Previous Post Tesla Unveils Chip to train A.I. Models inside its Data Centres
Next Post Apple has a lot to get through this fall