Facebook is testing a new tool that helps people get to know their neighbours and local communities, taking on social media app Nextdoor.

The company announced that it’s rolling out a feature with its mobile app called Neighborhoods for US Canada. Facebook users have to be at least 18 years old to use the new tool, which will allow people to find neighbours who have common interests, discover local groups and businesses, participate in polls along with receiving and offering help.

Using Neighborhoods is optional and users will need to share their location to get matched to a neighbourhood. Outside of sharing their Facebook profile information, users can also provide their interests and there’s also a section to get to know the pets in your neighbourhood. product manager for Facebook Neighborhoods, Reid Patton, said in an interview:

“We’re not only showing people who live in their neighbourhood but how they relate to them and what these people are interested in and care about.” 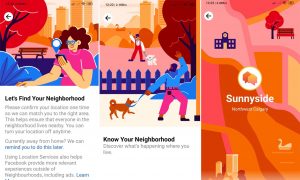 The new feature, available for both Android and iPhone users, could also create more challenges for Facebook, a platform that is already struggling to moderate the billions of posts that flow through its site.

Patton explains that every neighbourhood will also have moderators to make sure people are staying within the guidelines and being kind. Users with accounts that are too new and people who have repeatedly violated the site’s rules won’t be allowed to use Neighborhoods.

Users who are eligible to test out Neighborhoods will get a notification and a banner in the Facebook app encouraging them to try it out.

Previous Post YouTube Shorts rolls out to all creators in the US with a couple of new features in tow
Next Post Redmi Note 10 Pro 5G Tipped to Launch Soon, May Come With Snapdragon 750G SoC