On Tuesday, Alex Kipman, the inventor of Kinect and HoloLens, appeared in many living rooms to hand us jellyfish and sharks during Microsoft’s Ignite digital conference by using 3D capture technology to beam a lifelike image of a person into a virtual scene.

It was the company’s first opportunity to showcase some of the experiences made possible by Microsoft Mesh, a new mixed-reality platform powered by Azure that allows people in different physical locations to join collaborative and shared holographic experiences on many kinds of devices. Alex Kipman appeared on the Ignite virtual stage as a fully realized holoportation, narrating the show in real-time. He shared:

“This has been the dream for mixed reality, the idea from the very beginning. You can actually feel like you’re in the same place with someone sharing content or you can teleport from different mixed reality devices and be present with people even when you’re not physically together.”

Microsoft Mesh will also enable geographically distributed teams to have more collaborative meetings, with conducting virtual design sessions, assisting others, learning together and hosting virtual social meetups. People will be able to express themselves as avatars and overtime use holoportation to project themselves as their most lifelike, photorealistic selves. 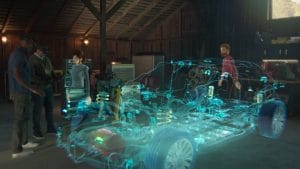 “More and more we are building value in our intelligent cloud, which is Azure. In these collaborative experiences, the content is not inside my device or inside my application. The holographic content is in the cloud, and I just need the special lenses that allow me to see it.”

With Microsoft Mesh-enabled applications, designers or engineers who work with 3D physical models could appear as themselves in a shared virtual space. Architects and engineers could physically walk through a holographic model of a factory floor under construction and potentially avoid costly mistakes.

At Ignite, Microsoft announced two apps built on the Microsoft Mesh platform. Those include a preview of the Microsoft Mesh app for HoloLens, which allows team members to remotely collaborate and is available for download. Customers can also request access to a new version of Mesh-enabled AltspaceVR, which will allow companies to hold meetings and work gatherings in virtual reality.

Microsoft Mesh’s open standards will give developers the freedom to build solutions that will work across many different devices: HoloLens 2, a range of virtual reality headsets, smartphones, tablets and PCs.

Over time, the company said it expects customers will be able to choose from a growing set of Microsoft Mesh-enabled applications built by external developers and partners, and also to benefit from planned integration with Microsoft products such as Microsoft Teams and Dynamics 365.