Now you can directly manipulate facial features, adjust skin complexion, and select from preset body types, hairstyles, clothing, and more with the help of this new software tool.  You can even edit your character’s teeth. The possibilities for creators are limitless!

But what exactly is the MetaHuman creator?

This is a cloud-streamed app that takes real-time digital human creation at an unprecedented standard of quality, fidelity, and realism. When your character is finished, you can export and download it, rigged and ready to animate in Unreal Engine. 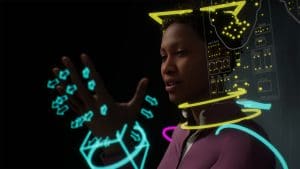 Over the last several years, Unreal Engine has shown numerous real-time digital humans of increasingly realistic quality. 3Lateral and Cubic Motion have led the field in creating performance capture-driven 4D animation. These companies are now part of the Epic Games family. Characters with next-gen makeovers, convincing real-time performance, who can even recite lines from Macbeth are breakthroughs in real-time human-driven digital tech.

What is more, the Co-Founder and researcher Mike Seymour, together with a team of experts showcased MEETMIKE, a real-time performance-captured VR version of himself, rendered at 90 FPS in stereo in Unreal Engine. You can check the MEETMIKE showcase from here.

You can get the sample project and find out more about these high-fidelity digital humans from here.