Arrival and Uber are Working on an Electric Ride-Hailing Car

Arrival is working with Uber to develop an electric car that will be “purpose-built” for ride-hailing. Its plans are to put the car into production in late 2023 and which will not be exclusive to Uber. Instead, the startup says the goal is to create an affordable vehicle that would appeal to the millions of ride-hailing drivers around the world.

Arrival just became a publicly-traded company in March after merging with a special purpose acquisition company, or SPAC. Founded in 2015, Arrival is also developing electric delivery vans (with UPS as a customer) and buses. It also has backing from Hyundai and Kia.

Arrival and Uber released a handful of renderings of the new car’s interior and said a final design will be revealed by the end of the year. Between now and then, the companies plan to get some drivers involved in the design process, too.

From the images, we can see that there’s a large horizontal screen mounted to the dashboard, similar to what’s in Tesla’s Model 3 and Model Y (and the forthcoming Model S and Model X refresh), and the steering wheel is also quite similar to what’s found in a Tesla, with just two scroll wheels and no driver display. 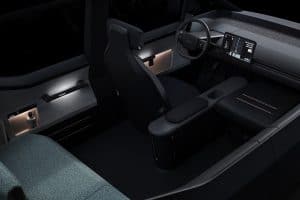 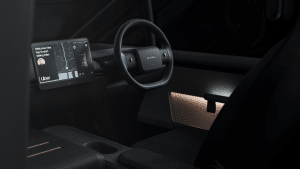 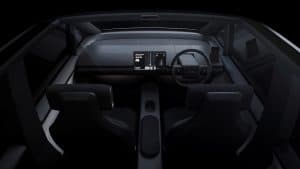 However, there are a few subtle differences that Arrival says could enhance the ride-hailing experience for both drivers and passengers. The driver’s seat is ergonomically designed to ease the physical strain of sitting in a car for hours on end. The front passenger seat folds up to create more legroom. There’s a bench-style seat in the rear, which makes it easier to get in and out of the car. There are also small, lighted cubbies and handrails on the inside of each door.

According to Tom Elvidge, Arrival’s senior vice president of mobility, their goal is:

“to make hundreds of small improvements, changes, and tweaks to the design that perhaps haven’t been applied before.”

Electric vehicles tend to have fewer moving parts than internal combustion cars and therefore require less maintenance and upkeep. They’re also inherently compliant with the zero-emission zones that have been adopted in cities across Europe, as well as broader internal combustion bans that are on the horizon. Elvidge also added that their goal is to design an affordable vehicle from the outset.

Arrival has yet to prove that strategy can work. Like many of its SPAC peers, it is still in the developmental phase and has yet to actually sell any production vehicles. Uber has quietly poked at a number of electric vehicle startups over the last few years but never struck any deals, though it has recently cleaved a number of money-losing divisions, like the one focused on autonomous vehicles and the one dedicated to flying taxis.