This Long-Awaited Technology May Finally Change the World

There is a technology currently undergoing testing that, when released, will become a long-awaited revolution in energy. This new technology will affect that which we consider mundane — power tools, toys, laptops, smartphones, medical devices, spacecraft, and the innovative new vehicle designs needed to wean us off of fossil fuels. We have known about this technology for centuries, yet until now we have only been able to take small steps towards its creation.

This description is referring to the upcoming innovations in the realm of battery technology — specifically that of solid-state batteries. And while both fusion power and solid-state batteries have been labelled technologies of the future but never of today, advancements and investments in solid-state materials have increased tremendously over the years. Today not only are there many major companies and credible researchers involved, but it also seems we may finally start seeing these batteries released in just the next few years.

Batteries are nothing more than devices that store chemical energy and convert it into electrical energy. They have four main parts: the cathode, anode, electrolyte, and separator. The cathode and anode are the electrodes.

What is important here is that there is one main difference between our current batteries and the solid-state batteries of the future: the electrolyte. Current lithium-ion batteries have a liquid electrolyte. Unfortunately, certain compounds present in the liquid electrolyte allow for the growth of crystalline structures known as dendrites. The dendrites produce long, sharp whiskers that can puncture the separator and cause short-circuiting, consequently leading to dangerous explosions. Solid-state batteries have a solid electrolyte that inhibits the growth of these harmful dendrites. Not to mention something astounding happens once the electrolyte is switched from liquid to solid.

The battery has a higher energy density, the risk of fires and explosions is greatly reduced, it takes up less space, and it is able to operate in a wider range of temperatures. Let’s take a look, for example, at what this would mean for vehicles.

By far the largest drawback of electric vehicles today is their limited driving range. An average electric vehicle will get a range of 250–300 miles (402–483 km) on a full charge. Fully charging the vehicle takes anywhere from an hour to 17 hours depending on whether the vehicle is charging at a station or using a standard outlet at home. Yet electric vehicles are expected to continue growing in popularity, eventually dominating the automotive sector. To reach this point they will need to expand their range to at least 450 miles (724 km) while remaining affordable to the consumer.

Here are the solid-state batteries

The driving range of electric vehicles becomes double or triple the current number. Companies can choose between making a smaller, lighter battery that charges faster or leaving the battery the same size with a much more extensive range. Charge times are reduced to just 15 mins. If we look at Samsung’s advancements in solid-state batteries we see they were able to develop a battery that can be charged and discharged over 1,000 times with a range of 500 miles (805 km) per charge. This is a battery life of 500,000 miles. And all while being able to operate efficiently in more extreme temperatures.

Something like this could be the end of gas-powered vehicles. For laptops and smartphones, it means the devices could last days on a single (very fast) charge, with the overall lifespan of the battery increasing from just 2 years to over 10. Medical devices could become more portable and compact while the larger temperature range means solid-state batteries could have applications in future space technology.

This potential has not escaped the attention of powerful companies. Volkswagen, Ford, BMW, Hyundai, Toyota, and Bill Gates have all invested billions of dollars into solid-state research. Toyota is planning a limited release of vehicles with solid-state batteries by 2025. And yet the most exciting breakthrough comes from someone you’ve probably never heard about. 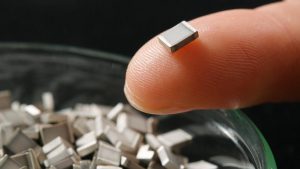 CeraCharge makes solid-state batteries the size of a grain of rice.

A research team led by physicist John Goodenough has submitted a patent for glass and a ceramic solid-state battery that is stable, non-flammable, offers faster charging, and has 3 times more energy storage than a regular lithium-ion battery. This was achieved by adding sodium or lithium to form an electrode in the battery. Equally as important, the battery is affordable and is estimated to last over 2,000 charge and discharge cycles. The operating temperature range for the glass battery is between -4º F and 140º F (-20º C and 60º C).

Goodenough himself is no ordinary scientist. He’s won 8 scientific awards, including the Nobel Prize in chemistry. His past world-changing innovations include the original lithium-ion battery and the RAM needed to make your computer run. His involvement — along with the involvement of many major competing companies — have put the solid-state battery well within our reach. We may begin to see the limited release of this technology in just 3 or 4 years, though it is difficult to say when it will achieve wider release to the public.

The battery represents a lot more than just convenience. It represents a key element in saving the world. More capable electric vehicles can provide a drastic shift in the automotive market — a shift away from more emission-heavy gas vehicles. Solid-state batteries may also be produced with earth-friendly materials like the very sodium found in our plentiful ocean water. But perhaps more than anything, the arrival of solid-state batteries will represent the capabilities of our most brilliant minds: the capability to make real a technology we’ve known about for centuries and dreamt about for decades. It does not forever have to remain a technology of the future, but can be the technology of today.