Twitter appeared to suffer some connectivity issues yesterday. According to DownDetector, a website that tracks the availability of different online platforms, Twitter had been hit with issues since 10:06 a.m. EDT. 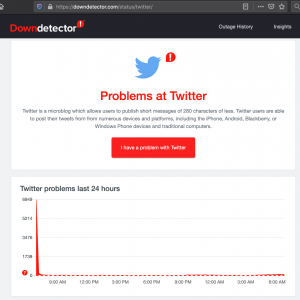 A Twitter status page lists the site as being fully operational with no incidents reported yesterday – April 20. It said in an incident report that the last major service disruption had occurred on April 12.