At its October 18 Unleashed event, Apple announced its all-new MacBook Pro lineup. Available in two sizes, 14-inch and 16-inch, the new systems are powered by the company’s proprietary M1 Max and M1 Pro processors, which build on the M1 System on a Chip (SoC) introduced last year.

The new MacBook Pro also features a stunning Liquid Retina XDR display, a wide range of ports for advanced connectivity, a 1080p FaceTime HD camera, and the best audio system in a notebook. Combined with macOS Monterey, which is engineered down to its core to take full advantage of M1 Pro and M1 Max, the user experience is simply unrivalled. Shattering the limits of what a notebook can do, MacBook Pro is designed for developers, photographers, filmmakers, 3D artists, scientists, music producers, and anyone who wants the world’s best notebook. The new MacBook Pro joins the 13-inch MacBook Pro with M1 to form the strongest lineup of pro notebooks ever. Customers can order the new 14- and 16-inch MacBook Pro models today, and they will be available beginning Tuesday, October 26. Greg Joswiak, Apple’s senior vice president of Worldwide Marketing said:

“We set out to create the world’s best pro notebook, and today we’re excited to introduce the all-new MacBook Pro with M1 Pro and M1 Max — a game-changing combination of phenomenal performance, unrivalled battery life, and groundbreaking features. The all-new MacBook Pro adds a breathtaking XDR display, more ports like MagSafe 3, an advanced 1080p camera, and a sensational six-speaker sound system, all in a stunning new design. The new MacBook Pro simply has no equal and is by far the best pro notebook we’ve ever built.”

During Apple’s event we extracted a few data points:

“The advent of Apple Silicon has been a shot in the arm for the MacBook lineup, and today’s announcement underlines Apple’s determination to accelerate the growth of its laptop business. The performance of the M1 chip in MacBook products released to date is a major endorsement of Apple’s investment in custom silicon. The M1 Pro and the M1 Max chips take this to new levels with further improvements in performance and battery life.”

Most Powerful Mac Notebooks Ever

The new MacBook Pro pushes the limits of what a notebook can do, delivering incredible performance and all-new capabilities. When compared to the previous-generation high-end 13-inch model, the all-new 14-inch MacBook Pro is immensely more powerful.3

Both M1 Pro and M1 Max are supercharged with a 16-core Neural Engine, allowing users to enjoy faster ML tasks, including: 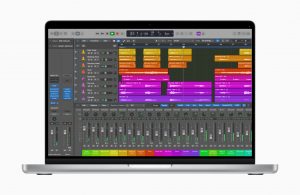 Featuring a brand new design, the 14- and 16-inch models of MacBook Pro were designed with a focus on performance and utility. Its all-new aluminium enclosure optimizes internal space for more performance and features. The thermal design enables MacBook Pro to deliver phenomenal sustained performance while staying cool and quiet.

The new MacBook Pro also comes with a Magic Keyboard that is set in a double-anodized black. Physical function keys replace the Touch Bar, bringing back the familiar, tactile feel of mechanical keys that pro users love. The new keyboard is complemented by а Force Touch trackpad. 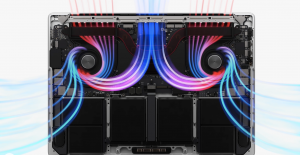 Both models feature three Thunderbolt 4 ports to connect high-speed peripherals, an SDXC card slot for fast access to media, an HDMI port for conveniently connecting to displays and TVs, and an improved headphone jack that supports high-impedance headphones. MagSafe returns to MacBook Pro with MagSafe 3, featuring an updated design and supporting more power into the system than ever before. MagSafe 3 makes connecting a charging cable quick and easy while protecting MacBook Pro. With M1 Pro, users can now connect up to two Pro Display XDRs, and with M1 Max, users can connect up to three Pro Display XDRs and a 4K TV, all at the same time. For wireless connectivity, MacBook Pro also features Wi-Fi 6 and Bluetooth 5.0. 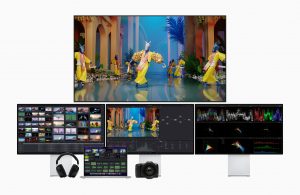 The new 14- and 16-inch MacBook Pro come with macOS Monterey, the latest version of the world’s most advanced desktop operating system. The combination of macOS Monterey and the powerful new M1 Pro and M1 Max delivers breakthrough performance and productivity for users. FaceTime includes new audio and video features that make calls feel more natural and lifelike, and new Continuity tools like AirPlay to Mac enable Apple devices to work even better together. Live Text and Visual Lookup bring new intelligence features to surface useful information, Safari includes powerful tab organization with Tab Groups, and the ease of automation comes to the Mac with Shortcuts.

All of Apple’s Mac apps are optimized for and run natively on M1 Pro and M1 Max, and there are over 10,000 Universal apps and plug-ins available, including Lightroom Classic, Cinema 4D, Capture One, and many more. Existing Mac apps that have not yet been updated to Universal will run seamlessly with Apple’s Rosetta 2 technology, and users can also run iPhone and iPad apps directly on the Mac, opening a huge new universe of possibilities. Powerful new features also come to Final Cut Pro and Logic Pro, allowing creatives to take full advantage of the power and performance of M1 Pro and M1 Max.

Best Audio Ever in a Mac Notebook

Тhe new MacBook Pro has industry-leading, studio-quality mics that have an even lower noise floor, resulting in clearer calls and voice recordings. A high-fidelity six-speaker sound system features two tweeters for a clearer soundstage and four force-cancelling woofers, resulting in 80% more bass. The sound system also supports spatial audio, which creates a sophisticated, three-dimensional listening experience. So whether users are listening to music or watching a movie, they will get a theatre-like experience. 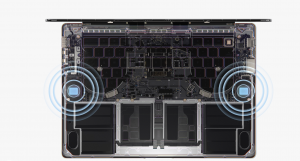 Better for the Environment

When it comes to the environment, the new MacBook Pro raises the bar yet again, including an enclosure made with 100% recycled aluminium, 100% recycled tin in the solder of its main logic board, and, for the first time in a Mac notebook, the use of 100% recycled rare earth elements in all magnets. Both models are also built with 35% or more recycled plastic in seven components, and all of the packaging wood fibres are from responsibly managed forests or recycled sources. MacBook Pro remains free of harmful substances, is manufactured using even more renewable energy, and meets Apple’s high standards for energy efficiency.

Apple is carbon neutral for global corporate operations, and by 2030, plans to have net-zero climate impact across the entire business, which includes manufacturing supply chains and all product life cycles. This means that every Apple device sold, from component manufacturing, assembly, transport, customer use, charging, all the way through recycling and material recovery, will be 100% carbon neutral.

We just saw Apple launch new Macs that promise an enormous leap in power and performance. That means these machines should deliver immediate productivity advantages to anyone using software optimized for the new chips. Wedbush analyst Daniel Ives, as reported by PED30, said:

“These products add to the biggest hardware cycle at Apple in roughly a decade and remain a major growth catalyst for the story heading into 2022.”

Since nobody has one yet, we don’t know how well these systems will perform in the real world. We also don’t know if these systems will outperform high-end PC desktops, but they probably will. Perhaps the biggest immediate endorsement for this event is the 10% uptick in AAPL stock price as analysts look at these Mac beasts and see Big Mac Sales ahead.