How long does it take to one Software Engineer to get a job?

A woman software engineer spent 8 hours daily applying to entry-level coding jobs for 6 months. She was rejected 357 times before receiving an offer.

Sophia Cheong’s career started at a Korean barbecue restaurant in California while completing her bachelor’s degree in business administration. After graduating she was promoted to assistant general manager and, later, the director of operations. Then a coworker started teaching her how to code. Cheong commented:

“I fell in love. I know it’s cliche, but I felt like it was my true passion. … I was getting up every morning really excited to learn.”

Millions of Americans quit their jobs during the “Great Resignation”. Cheong also had this opportunity during the pandemic to switch career paths, something she had been wanting to do for some time. Cheong immediately used the money she had saved to enrol in a 13-week software-engineering boot camp, where she completed over 1,000 hours of full-stack coding. One week after graduation, she started to look for a job.

Monday through Friday from 9 a.m. to 5 p.m Cheong applied to every entry-level software-engineering job or internship she could find, spanning 18 countries. While submitting applications, she managed to create an online portfolio.

“I was pretty naive. I thought I’d have a job after a month because Hack Reactor has such a good reputation. But then one month turned to two months and then three and four, and I started thinking, ‘Oh my God, why am I not getting a job? What’s wrong with me?'” 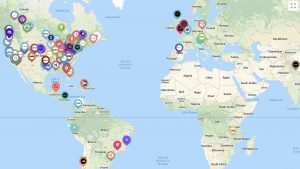 A screenshot of Sophia Cheong’s 359 applications around the world. Photo Credits: Insider

Constantly hearing about the national labour shortage and the ever-growing demand for tech talent didn’t help her morale. According to US labour statistics, the shortage of engineers in the US will exceed 1.2 million by 2026.

Six months later, Cheong had interviews with 40 employers and was rejected 357 times. She said that most interviewers asked why she had switched careers and how her experience in the service industry would help her succeed in tech. The main reason why she has been denied was that other candidates were more senior than her.

The same week Cheong was supposed to head back to working at the restaurant, she received two job offers. One, a junior software-engineer position at Homee, would pay 120% more than her previous salary, she said. The company’s Chief Technology Officer Mitch Pirtle told Cheong during the interviewing process:

“We’re all about taking chances with the newcomers. We know how hard it is to get your foot in that door.”

After getting a job, Cheong posted about her strenuous job hunt on LinkedIn. Hundreds of job applicants struggling to find work flooded the comment section, asking for advice and sharing their similar stories of constant rejections.