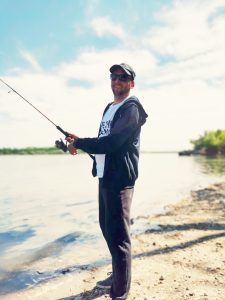 What is the reason to nominate him?
Martin deserves to be the Developer on focus because of the interesting and very challenging career path that brought him to Milestone Systems. His interest in technologies started at the age of 14 but he always knew he would become an engineer. The engineering part of everything thrills him because he could start a thing from scratch and build something that is working very well. He loves trying new things and exploring working with different programming languages. As a very dedicated professional, he is always open to new ideas and approaches. Working with him is not only fun but also rewarding.

Please, tell us more about his professional characteristics.
Martin really likes experimenting with different technologies. He is flexible when it comes to working with diverse programming languages. He loves learning new things and solving different problems. What makes him a great developer is his ability to think outside the box.

Tell us more about him as an individual?
When Martin is working on something, he deep dives into the problem. Very dedicated and persistent, he always finds the most flexible approaches to solve a problem. 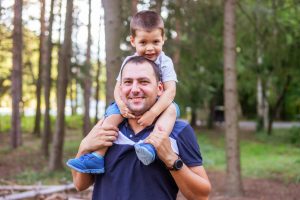 Martin and his son

Can you describe how his working day goes?
For Martin, every day is different. Except for software engineering and diverse technologies, Martin is very interested in finance and stock markets. So, in the morning, he usually discusses these topics over a cup of coffee with like-minded colleagues. After that, he participates in the teams’ daily stand-ups. Then, he focuses on his tasks for the day – sometimes that includes research or refactoring, bug fixing. Overall, he wants to focus on coding as much as possible. Martin is keen on yoga, so he tries to make time 1-2 per week for a yoga class as well.

What are his challenges? What is he currently working on?
The project Martin and his team are currently working on are quite big and challenging. It’s a Data Insights Platform that collects big data sets from different sources, enriches them and provides them through a platform to Milestone partners. The third-party vendors are then able to consume those APIs and create applications based on the data. Other challenges he is currently facing are related to the Cloud. The team is experimenting with different technologies and looking for the best-case scenarios to solve Cloud-related hitches.

Does he help his colleagues with their tasks?
That is part of Martin’s job – he tries to proactively approach more junior colleagues when he senses they are struggling. However, the whole team is structured in а way where everyone is equal. The less experienced people are not afraid to ask questions and bring up new ideas, supported by the senior ones with everything, no matter what. 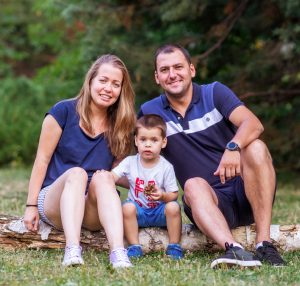 Martin and his family

Describe him in 3 words.
Dedicated, flexible and persistent.

What are his hobbies?
It won’t surprise anyone that Martin’s hobbies include technologies. He is also interested in finance, stock markets and fishing. As a family man, everything related to his son and wife is a priority for him. He likes hiking and enjoys spending time with his family in the mountain. His son is very keen on Lego, so you can often find him building Lego with his son during the weekends.

What kind of music does he listen to? How does he have fun?
He loves BG rap and hip hop and prefers underground music.

What does he prefer- Android or iOS? Why?
As an Android user, Marting prefers Anrdoid, but soon, he will switch to iOS because he finds it is way faster and durable.

What is his style? (clothes, character, etc)
Casual smart, he likes to feel comfortable in his clothes. 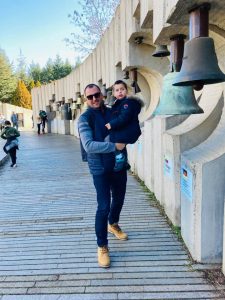 Martin and his son

Which programming languages does he use? Who are his favourites?
Martin feels most comfortable working with .NET – this is his favourite language because it is powerful and robust. As he likes to say, it is an enterprise language for serious projects. Martin is also a fan of NodeJS, Python, and Go.

Can you tell us an interesting story about him?
Martin graduated from high school in Italy. He lived there with his family. When he turned 18, he decided to come back to Bulgaria to obtain a bachelor’s degree in Software Engineering. However, when he came, he found out that the high school diploma he has from Italy is not relevant here. He had two options – to enrol in high school in Bulgaria and study for another four years for a high school diploma from here, or to forget about studying Software Engineering and receiving his Bachelors. He chose the first option and started high school for the second time at the age of 18. Back then, it was quite shocking and frustrating for him. Now he shares that he does not regret his choice. He was persistent in studying Software Engineering because of the interesting subjects and the professionals he would meet while studying at the university.