Two revolutionary Raspberry Pi computers just launched from Cape Canaveral aboard SpaceX 24 to empower children and teens to run their own experiments on the International Space Station (ISS).

The European Astro Pi Challenge: Mission Zero from the Raspberry Pi Foundation and European Space Agency (ESA) inspires young people to discover and develop a love of coding and digital creativity with a truly ‘out of this world’ experience.

It guides them how  to code a sensor check on board the ISS, and puts their creativity into action by designing a digital illustration and writing a personal message for the astronauts orbiting 408km above the Earth. 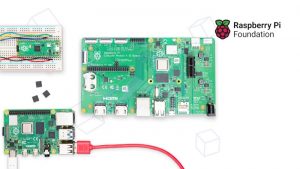 Children don’t need any previous experience of coding or specialised equipment, just a computer with an internet connection and their imagination. It is completely free to take part at astro-pi.org until 18 March 2022 and is suitable for children at the age of six and above. Philip Colligan, CEO, Raspberry Pi Foundation said:

“The Astro Pi Challenge inspires children to discover coding, explore digital creativity and take part in an “out of this world” learning opportunity by coding an experiment on the International Space Station. We are putting the power of computing into children’s hands with one of the coolest educational opportunities out there”.

Every participant who follows the guidance is guaranteed to have their experiment, message and image run on the ISS and will receive a certificate to mark when they have gone into orbit.

The new Raspberry Pi computers have already launched to replace older models – Ed and Izzy – that have been on the space station since 2015. Since then, 54,000 young people across Europe and Canada have taken part in the Astro Pi Challenge. Participants in this year’s challenge will also have the opportunity to give a name of the new computers.

The Raspberry Pi Foundation is a UK-based charity that works to put computing and digital making into the hands of young people around the world.

Previous Post Why has the release of Final Fantasy 6 Pixel Remaster been delayed?
Next Post TikTok replaced Google as this year's most Popular Domain