Trendforce has just released 10 major trends that are expected to take place across various segments in the tech industry. 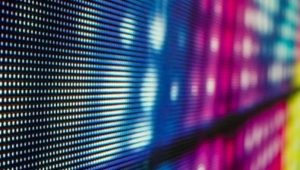 A substantial number of technical bottlenecks in Micro LED development will still persist in 2022. While Micro LED manufacturing costs are expected to remain sky-high due to these bottlenecks, companies have not shown decreased willingness to participate in all segments of the Micro LED supply chain.

As the supply of and production capacity for AMOLED panels continue to rise, AMOLED technology has also become increasingly mature. Leading suppliers are still attempting to tack on additional functions and improved specs to their AMOLED panels in order to not only raise said panels’ added values but also maintain the competitive advantages of the suppliers themselves. The primary value added to AMOLED panels in 2022 will likely continue to be the ever-improving foldable designs, which will feature optimized weight reduction and power efficiency. Apart from mainstream foldable phones that can unfold to reach tablet-like sizes, clamshell-like designs such as flip-up and flip-down smartphone bodies will also emerge as a form factor that more closely resembles the smartphones currently in use.

As semiconductor manufacturing processes gradually approach physical limits, chip development must now turn to either “changes in transistor architecture” or “breakthroughs in back-end packaging technology or materials” in order to achieve faster performances, reduced power consumption, and smaller footprints. After incorporating EUV lithography at the 7nm node in 2018, the semiconductor industry will welcome yet another revolutionary process technology in 2022 – the 3nm node. More specifically, TSMC and Samsung are expected to announce their respective 3nm process technologies in 2H22.

In contrast with the FinFET architecture, in which the gate makes contact with the source/drain channel on three sides, the GAAFET architecture consists of a gate that surrounds the nanowire or nanosheet channel on four sides, thus increasing the surface area of contact. 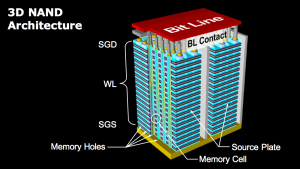 The three dominant DRAM suppliers (Samsung, SK Hynix, and Micron) will not only gradually kick off mass production of next-gen DDR5 products, but also continue to increase the penetration rate of LPDDR5 in the smartphone market in response to demand for 5G smartphones. With memory speed in excess of 4800Mbps, DDR5 DRAM can massively improve computing performances via their fast speed and low power consumption. As Intel releases its new CPUs that support DDR5 memory, with Alder Lake for the PC segment, followed by Eagle Stream for the server segment, DDR5 is expected to account for about 10-15% of DRAM suppliers’ total bit output by the end of 2022.

Turning to NAND Flash products, their stacking technologies have yet to reach a bottleneck. Hence, after 176L products entered mass production in 2021, suppliers will continue to migrate towards 200L and above in 2022, although these upcoming products’ chip densities will remain at 512Gb/1Tb. Regarding storage interfaces, the market share of PCIe Gen4 SSDs will likely skyrocket in the consumer PC segment next year. In the server segment, as Intel Eagle Stream CPUs, which support PCIe Gen 5, enter mass production, the enterprise SSD market will also see the release of products that support this interface.

Mobile network operators have been actively releasing 5G SA (standalone) networks as the core network powering various services around the world, in turn accelerating the build-out of base stations in major cities, diversifying their network services (via network slicing and edge computing), and delivering end-to-end networks with a high degree of quality assurance. Moving to 2022, applications that are at the intersection of 5G, massive IoT, and critical IoT will emerge in response to enterprise demand. These applications, including light switches, sensors, and thermostats used in smart factories, involve the combination of network endpoints and data transmission.

3GPP recently announced that Release 17 Protocol Coding Freeze will take place in 2022. Release 17 represents the first time 3GPP has incorporated NTN (non-terrestrial network) communications into its releases and therefore marks a significant milestone for both the mobile communications industry and the satellite communications industry. Prior to this, mobile communications and satellite communications had been two separate, independently developing industries. That is why companies working across the two industries in the upstream, midstream, and downstream supply were generally different as well. After 3GPP includes NTN in its upcoming release, the two industries are likely to generate more opportunities for collaboration and co-create brand new innovations. Regarding the deployment of LEO (low earth orbit) satellites, US-based SpaceX has applied to launch the highest number of satellites among all satellite operators.

While smart factories are among the first to leverage digital twins, IoT technologies are expected to become the backbone of the metaverse

The new normal that emerged in the wake of the COVID-19 pandemic continues to propel the demand for contactless devices and digital transformations. As part of this evolution, IoT development in 2022 will likely focus on CPS (cyber-physical systems), which combines 5G, edge computing, and AI technologies to extract and analyze valuable information from vast data streams for the purpose of smart automation and prediction. A current example of CPS applications is the digital twin, used for such verticals as smart manufacturing and smart cities; while CPS integration for the former facilitates design, testing, and manufacturing simulations, the latter make use of CPS to monitor significant assets and assist in policymaking. Now that industrial realities have become more complex, and the interplay between usage cases and equipment have increasingly demanded attention, digital twins will subsequently be deployed to a wider range of applications. Paired with 3D sensing, VR, and AR capabilities, IoT-based metaverse will likely emerge as a smart, complete, real-time, and safe mirror to the physical world, and the first application of IoT-based metaverse is expected to be smart factories.

The COVID-19 pandemic has fundamentally changed the way people live and work. For enterprises, the pandemic not only accelerated their pace of digital transformation but also increased their willingness to integrate emerging technologies into their existing operations. For instance, AR/VR adoption for applications such as virtual meetings, AR remote support, and virtual design has been on the rise recently. On the other hand, companies will likely focus on various remote interaction functionalities in virtual communities and online games as an important AR/VR market segment. TrendForce, therefore, believes that the AR/VR market will expand by a considerable margin in 2022 due to the falling retail prices of AR/VR hardware as well as the growing adoption of such hardware for various use cases.

As part of autonomous driving technology’s implementation aimed at improving everyday life, AVP (automated valet parking), an SAE level 4 driverless parking service, is expected to become an important optional function of high-end vehicles beginning in 2022. Relevant international standards are currently being drafted and are expected to facilitate the adoption of AVP going forward. However, since AVP systems differ according to vehicle specifications, they are subject to various restrictions related to driving conditions, including fixed/unfixed routes and private/public parking spaces, while parking lot conditions such as wireless network connectivity and the comprehensiveness of traffic markings can also affect the viability of AVP. The distance between people and the vehicle during AVP use, on the other hand, is governed by domestic laws. In view of automakers’ diverse technological roadmaps, AVP parking routes are generated by either local computing on the vehicle end or cloud computing, the latter of which requires sufficient network connectivity in order to function.

The gradual phasing out of ICE vehicles by various governments across the 2025-2050 period is set to both accelerate the pace of EV sales and increase the penetration rate of SiC and GaN devices/modules. Energy transition activities worldwide as well as the rapid growth of telecom applications such as 5G technology have also led to a persistent bull market for third-generation semiconductors, resulting in strong sales of SiC and Si substrates.

In response to this quandary, substrate suppliers, including Cree, II-VI, and Qromis, are now planning to not only expand their production capacities in 2022 but also migrate their SiC and GaN production to 8-inch wafers, in hopes that these plans will gradually alleviate the prevailing shortage in the third-generation semiconductor market. On the other hand, foundries such as TSMC and VIS are attempting to shift to 8-inch wafer fabrication for GaN on Si technology, while major IDM Infineon is releasing products based on the latest CoolSiC MOSFET, delivering trench designs that enable significant power efficiency for semiconductor devices. Finally, telecommunication component provider Qorvo has also released a new GaN MMIC copper flip-chip packaging architecture for military applications.