Harvard professor argues that alien ship paid us a visit

To discover that there is an intelligent life far beyond our tiny planet can literally transform human history and future. But what if scientists want to collectively ignore the evidence?

Harvard astronomer prof. Avi Loeb argued that “alien vessels paid us a visit”, according to Phys.org 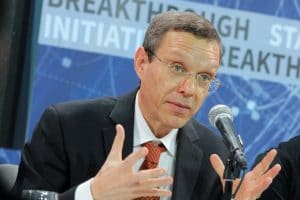 Avi Loeb, the longest-serving chair of astronomy at Harvard who has published hundreds of pioneering papers, stated that the unusual characteristics of an interstellar object that sped through our solar system in 2017 were alien technology. In his opinion:

“The correct approach is to be modest and say: We’re nothing special, there are lots of other cultures out there, and we just need to find them.”

Loeb lays out the argument for the alien origins of the object named ‘Oumuamua (“scout” in Hawaiian)  in “Extraterrestrial” back in 2017 when astronomers observed the first recorded interstellar interloper. The only thing that is known is that it didn’t seem to be an ordinary rock or a comet because there was no visible evidence of this “outgassing.” The object got brighter and dimmer and it was unusually luminous, suggesting it was made from a bright metal. Loeb also added:

“These ideas that came to explain specific properties of ‘Oumuamua always involve something that we have never seen before. If that’s the direction we are taking, then why not contemplate an artificial origin?”

We only learned of ‘Oumuamua’s existence once it was already on its way out of our Solar System. Loeb says simulations favour the latter and believes the object was deliberately crafted as a light sail propelled by stellar radiation. Before encountering our Sun, ‘Oumuamua was “at rest” relative to nearby stars which is statistically very rare. 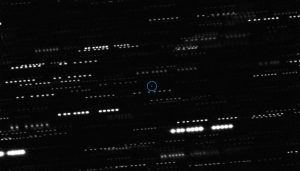 Marked with a blue circle, Oumuamua appears as a faint dot in the centre of this image. Credits: ESO/K.

Loeb’s ideas have placed him at odds with fellow astronomers. He said that the search for alien life is a far more common sense avenue to pursue.

“If we find evidence for technologies that took a million years to develop, then we can get a shortcut into these technologies, we can employ them on Earth. This can also give us a sense that we are part of the same team, rather than fight each other as nations do very often, we would perhaps collaborate.”