Windows laptops with Qualcomm-made chipsets have been available for over two years, but the first wave of models suffered from poor performance. Details about the company’s next ARM Windows laptop have now appeared, so Samsung apparently isn’t giving up.

Internal presentation slides about the Samsung Galaxy Book Go were first leaked in February, revealing there would be at least two hardware configurations, both with a 14-inch FHD screen and Windows 10 Home Edition. The lower-end option would have a lower-end Snapdragon 7c SoC, 4GB RAM (ew), and 128GB of internal storage. There’s also expected to be a more expensive model with a Snapdragon 8cx chip, 8GB RAM, and 256GB of storage. 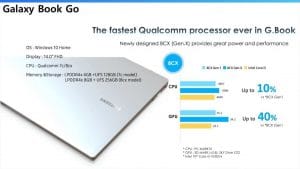 It was unclear at the time how much the Samsung Galaxy Book Go could cost, however, there are claims that the entry-level Snapdragon 7c model will be $349.99 in the United States. That would make it significantly cheaper comparing it to most Snapdragon 8cx laptops, like the Galaxy Book S and Surface Pro X.

The Galaxy Book Go is expected to launch on April 28th, likely during the company’s third ‘Galaxy Unpacked’ live event of 2021, which is scheduled for the same day. The event will most likely be focused on the Galaxy Book Pro and Galaxy Book Pro 360, which have both been leaked extensively.

The Galaxy Book Go likely won’t come close to matching the performance of Apple’s M1-based MacBook, but the much lower price point could make that more acceptable.